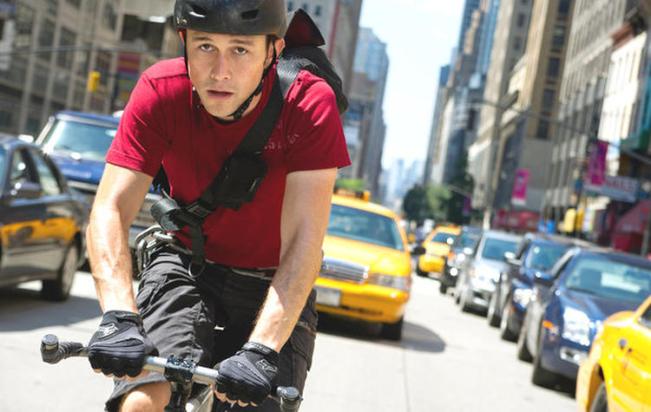 The best male performance last year was Michael Shannon’s lead role in the criminally under-seen Take Shelter. Shannon is at the stage of his career when he’s recognizable by most but identifiable by few. His performance in Take Shelter was finely nuanced, a poignant and mysterious look at a man who is either becoming prophetic or schizophrenic. It was a brilliant piece of acting, earning him numerous accolades and awards. Shannon firmly proved he is one of the most gifted actors of our time.

This is not that performance. Shannon throws all subtlety out the window in Premium Rush. This is a movie built for one purpose and one purpose only — fun — and Shannon takes full advantage of the carefree environment to ham it up and chew the scenery harder than anyone probably has since Kevin Spacey in Superman Returns.

Premium Rush is an action movie that doesn’t try to be anything more what it is. It’s not concerned with labyrinthine twists or evocative emotion; it just wants to entertain you.

Joseph Gordon-Levitt stars as bike messenger Wilee (yes, like the coyote), a man who weaves through Manhattan traffic the way Bobby Fischer played chess. (There are numerous sequences in which Wilee has to quickly react to an obstacle and reviews every outcome in a split-second, like Robert Downey, Jr. in Sherlock Holmes.) He’s capable of much more than being a daredevil courier, but loves what he does.

Wilee’s loves his it far less when, one day, he is tasked with delivering a package of significant worth. Wilee isn’t aware of its value. Nor is he aware of another man who wants the package at any cost. What should be a simple Point-A-to-Point-B delivery becomes a crazy cat-and-mouse game between Wilee and a crooked cop who’ll stop at nothing to steal the package and use it to pay off his life-threatening gambling debts.

Really, the package itself doesn’t even matter. It’s a MacGuffin, a simple plot device whose sole purpose is to drive the action. It could just as well be a mysterious briefcase or the Ark of the Covenant.

This is by no means uncommon in action movies. Many great thrillers have done it, from The Maltese Falcon to Mission: Impossible III. The key to a great movie with a MacGuffin is how well the movie distracts you from the pointlessness of the plot. That’s the only area where Premium Rush really seems the stumble.

David Koepp, the screenwriter behind Jurassic Park and Panic Room, does an admirable job keeping the kinetic energy up and helping you really feel the speed at which the action’s happening. Unfortunately, the movie drags on just a bit too long, even at a slim 91 minutes.

By the final act, I found myself just too aware of the preposterousness of Wilee’s investment in such a high-stakes game of corruption and casualties. A subplot with a NYPD bike cop who routinely gets picked on by couriers to the point of basically being bullied also wore its welcome out with me early on.

Gordon-Levitt does a wonderful job with Wilee, although after such strong performances in 500 Days of Summer, Inception, and even The Dark Knight Rises, it’s a bit disappointing to see him not doing anything more in this role beyond just being likeable. Still, that likeability does carry most of the movie.

Premium Rush also has an interesting sense of humour to itself. It’s very subtle at times, very loud at others, and just generally different than I expected to find in this type of movie. I wouldn’t go so far as to say the movie is outright funny, but it certainly doesn’t take itself very seriously. That helps it a lot.

And then there’s that performance of Michael Shannon’s. He may be overacting like the best of them, but what a joy it is to watch. He makes his dirty cop a psychopathic time bomb, always on the verge of blowing up. And the times he does, it rivals the best dramatic explosions of Christopher Walken or Al Pacino.

The pacing problems ultimately prevent the movie from being anything more than an enjoyable late-summer thrill ride, but Premium Rush is a good for what it is: easy on the brain, but fleeting in the memory — a lean but mostly satisfying meal to cap off a rather supersized summer.