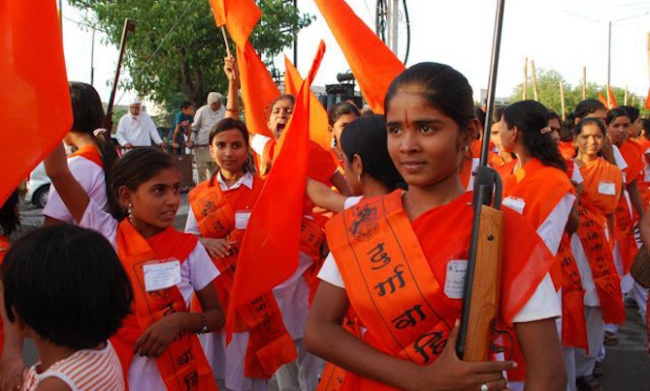 The final day of the 2012 AGH BMO World Film Festival didn’t have the spectacle or power of the opening days of the festival, but it was an excellent way to end the festival on a lighter note.

THE WORLD BEFORE HER

The World Before Her began the day very interestingly, examining two totally different walks of life in modern India. The most well-constructed documentary so far this year, it follows two young women both doing what they feel they must to assert some control over their lives and escape their conditions.

Ruhi Singh has been selected as one of the 20 competitors for the title of Miss India beauty pageant. To win the title means fame and money, two things she can use to better her and her parents’ modest lives. Conversely, Prachi Trivedi is a leader at a Hindu fundamentalist camp, training young girls for the Durga Vahini.

Both Singh and Trivedi are running, in their own ways, from the life they would be stuck with if not for the power and self-confidence such things as beauty pageants and military camps imbue them with.

The World Before Her traces two very different lives’ paths, but never uses those lines to draw any conclusions. Audiences are left to connect the dots themselves, making the witnessed experiences all the more powerful.

Lightening the mood up afterward was Boy, a delightful coming-of-age dramedy from New Zealand.

Taking place in 1984, just after the release of Michael Jackson’s Thriller, Boy follows an 11-year-old who goes by the very name of Boy (James Rolleston). Boy lives with his grandmother, younger brother, and several cousins; his mother died years earlier and his father left a while back and hasn’t returned.

When his father, Alamein (Taika Waititi), does return, Boy is thrilled. After telling so many stories to friends and teachers about his heroic dad, Boy finally would be able to spend time with him and see just how amazing he is. Alamein’s real reason for returning, though, turns out to be more complicated than Boy expects.

Boy is the highest-grossing New Zealand film of all time, and it’s not hard to understand why. The skilled and humourous performances, plus the light-hearted score and the whimsical screenplay, make it one of the best coming-of-age movies in years.

Wim Wenders was already preparing to film a documentary about dance choreographer Piña Bausch when Bausch unexpectedly died in 2009. Instead of scrapping the picture, Bausch’s dance company convinced Wenders to reshape the film as both a demonstration of Bausch’s ground-breaking choreography and a memorial for her, told through the dancers’ stories.

The dance scenes themselves are breathtaking and an excellent reason for the movie being filmed in 3D. The intercut testimonials and remembrances, though, while sometimes interesting and surely cathartic for the interviewees, tended to slow the film to a crawl and interrupt and building pace.

For a final selection in the festival, Piña didn’t wow, but that served the festival well. Instead of audiences’ thoughts gravitating towards a particularly memorable last film over all earlier ones, patrons were left more able to reflect over all the films shown over the last ten days.

Whether measured in tickets, happy audiences, film selection, or stimulating post-movie conversations, The 2012 AGH BMO World Film Festival proved to be a great success. The task ahead for the Art Gallery of Hamilton will now be topping it in 2013.

(Check back for a “Best of the Fest” wrap-up, coming soon.)