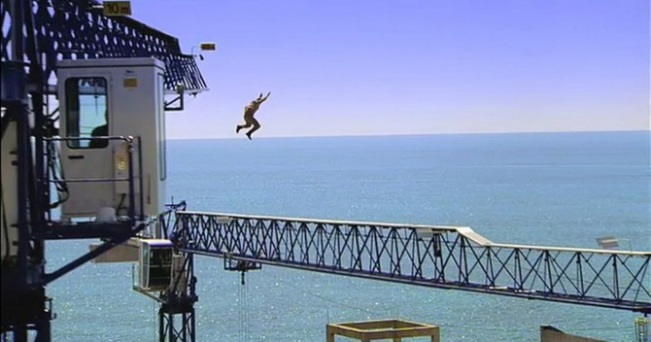 As a seven-part feature, I’ll be counting down the final week to Skyfall‘s release in North American theatres on Nov. 9 with seven James Bond-related articles. Day 2: The Best Stunts.

The James Bond movies have always had an action element to them, and with action scenes eventually comes outrageous stunts. The 007 series has had some of the craziest of cinema over the years, setting numerous Guinness world records.

Bear in mind, this list isn’t dealing with entire action sequences. Each of these stunts is just one ridiculous piece of action, rarely longer than 20 or 30 seconds. Because not all the stunts were available on YouTube as videos on their own, some of the clips will be for a full scene, but I’ve identified the relevant times within each clip.

In a movie of wide hits and misses, one of the best parts is a free fall by Rick Sylvester as Bond. 007 has just finished scaling the face of a cliff when, before he can get to his feet, he’s kicked off the cliff and falls… and falls… and finally snaps to a halt as the rope goes taut.

A scene in Live and Let Die required henchman Tee Hee leaving Bond to be eaten by crocodiles. The man who owned the crocodile farm where Live and Let Die was filming, Ross Kananga, suggested running across the croc’s backs. When no one else was willing to do it, Kananga suited up as Bond and performed this daring escape. Fun fact: This was actually the fifth take; during the fourth attempt at filming the stunt, one of the crocodiles almost bit Kananga’s heel.

7. MOONRAKER
“Skydiving Without a Parachute”

While the final act of this movie contains most of the worst material filmed for a Bond movie, there are a number of good set pieces through the first two-thirds of the movie. The pre-credits sequence, for one, involves an incredible skydive where 007 (stuntman Jake Lombard) is pushed out of a plane without a parachute and then has to wrestle a free-falling henchman (skydiver B.J. Worth) for his.

6. THE MAN WITH THE GOLDEN GUN
“Hornet Aerial Twist”

In a chase in The Man with the Golden Gun, Bond (stunt driver “Bumps” Willard) floors the pedal of an AMC Hornet and corkscrews off a twisted stump of a bridge, landing smoothly on the other side. Massive amounts of computer calculations were made and the stunt was repeatedly put through simulators before it was attempted for the film. It resulted in one of the greatest car stunts in any film, but was sadly tarnished in post-production when the composer decided to add an unfortunate slide whistle sound effect. Ignore the whistle and just behold the impressive stunt.

Arguably Pierce Brosnan’s most underrated foray as 007, Tomorrow Never Dies involved many great action sequences, most of which involved vehicles. One elaborate chase sequence on a motorcycle with a helicopter in pursuit reaches a dead-end, until James Bond and Wai Lin (stunt drivers Jean-Pierre Goy and Wendy Leech) get a racing start and leap over the helicopter to another rooftop.

During the climactic chase sequence in Licence to Kill when 007 is driving a tanker and some baddies pull a rocket launcher on him, he does what only James Bond (stunt driver Remy Julienne) could: he uses a ramp of dirt to pop the truck onto a side wheelie, so the rocket flies underneath it. For bonus measures, he also keeps the wheelie going just long enough to squash the henchmen’s car.

In arguably the greatest action sequence of all 22 Bond films, 007 chases a terrorist through a construction yard. Following a fistfight on the arm of a crane, the terrorist (freerunner Sebastian Foucan) leaps from one crane to another, and then to a rooftop; Bond (Daniel Craig, doing the stunt himself) follows suit.

After a six-year leave of absence from cinemas, James Bond needed to make a spectacular re-entrance. The opening scene of GoldenEye delivered that in every way. Sneaking into a dam through the back entrance, 007 (stuntman Wayne Michaels) bungee jumps off the lip of the dam, over 700 feet down, before grappling to the entrance.

As magnificent a dive as 007 made in the opening of GoldenEye, The Spy Who Loved Me’s was better. Rick Sylvester, the same stuntman who’d later return to fall off a cliff in For Your Eyes Only, skied off a 2,000-foot-high mountainside (Canada’s Mount Asgard, doubling for Austria) and plummeted seemingly forever, until a Union Jack parachute finally opens and Bond soars to safety. It set a record for the highest ski BASE jump on film and remains one of the most memorable stunts in action movies.

“007 DAYS OF JAMES BOND” WILL RETURN
IN
THE BEST HENCHMEN