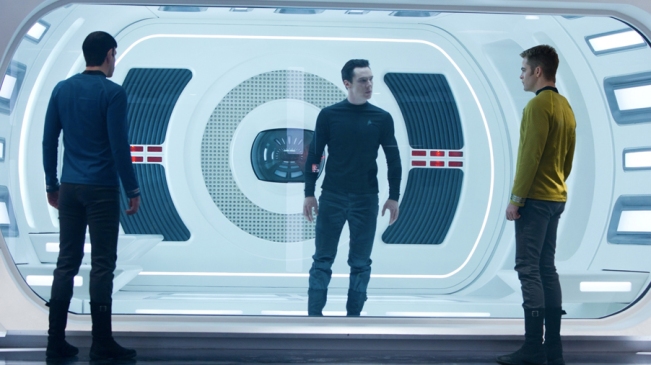 J.J. Abrams’s 2009 Star Trek was an exhilarating breath of fresh air for a franchise that had become stale and somewhat antiquated, despite its futuristic setting. By injecting his trademark cinematic flair and knack for gripping action, the reboot soared to heights not reached on the big screen since 1982’s Star Trek II: The Wrath of Khan. Low expectations four years ago made Abrams’s job easier; his follow-up arrives with much larger hype and much closer scrutiny.

Star Trek Into Darkness is reflective of a new trend in recent blockbusters, where over-the-top action sequences are balanced with grey morality and disturbing characters whose actions and choices mirror the dangerous time we now live in (largely due, cinematically, to the influence of Christopher Nolan’s Dark Knight trilogy). Just as James Bond had to tackle new threats of terrorism and treasonous sabotage in last year’s Skyfall, James T. Kirk and crew find themselves faced with a formidable threat aiming to destroy Starfleet from within.

That threat is John Harrison, a man with a mysterious backstory and played with complicated malevolence by Benedict Cumberbatch. After Harrison attacks Starfleet bases in London and San Francisco, Kirk (Chris Pine) and Spock (Zachary Quinto) trek off in a mission of vengeance, setting in motion a story with more layers than an onion.

Abrams and his co-writers deftly lure you into thinking you know what will happen, even telegraphing a few twists, just to be able to pull the rug out from beneath you even more shockingly. Star Trek Into Darkness is one of those incredibly clever movies where the more sure you are about what will happen, the more likely you are to fall for the red herrings.

The action sequences in the movie are riveting, leaving just enough time in between to allow for conversation and character development. As great as many of the scenes are, though, the film can’t help but come off quite reheated. 2009’s Star Trek felt fresh and bold; Star Trek Into Darkness often feels like a remix of its predecessors, a greatest hits album performed by a talented cover band.

It’s a pointless quibble to complain that Star Trek Into Darkness’s themes of violence and terrorism are a far cry from the optimistic and hopeful vision of the future that creator Gene Roddenberry first imagined a half-century ago. In the end, while the movie certainly explores its titular dark themes, it is an exhilarating thrill ride that starts strong and never slows down. It’s just a shame that for a series that aims to boldly go where no one has gone before, Star Trek Into Darkness doesn’t end up doing much new.