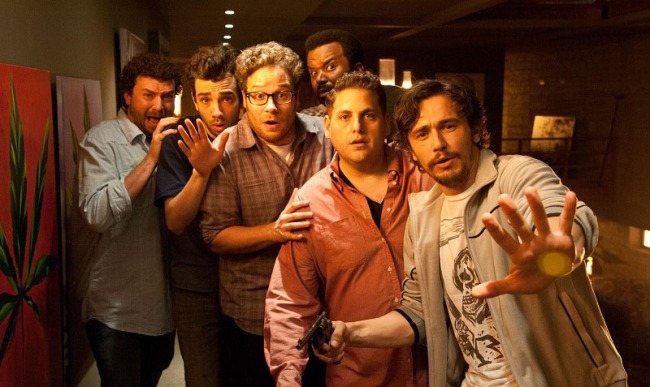 What has always made the best movies from the Judd Apatow factory different from other comedies is heart. The 40-Year-Old Virgin, Superbad, and Forgetting Sarah Marshall were all raunchy and vulgar, but beneath the R-rated jokes were characters dealing with real emotions in realistic ways.

When the emotions in an Apatow movie feel forced, it leads to Knocked Up’s rom-com plot between Katharine Heigl and Seth Rogen or the scattershot Pineapple Express, which seemed to forget it was even a comedy by the second half. This is the End – which isn’t an actual Apatow movie but does employ all of his usual actors, writers, and producers – showed incredible promise from the clever trailers, but sadly is much more akin to the latter movies than the former.

This is the End disguises itself as a movie about real people, with actors playing slightly exaggerated versions of themselves. Jay Baruchel flies into L.A. to hang out with Seth Rogen, who convinces Baruchel to go with him to a party at James Franco’s house. Guests at the party include virtually every hot comedic actor working today, from Craig Robinson, Danny McBride, and Jonah Hill to Michael Cera, Mindy Kaling, and Aziz Ansari.

The early scenes are some of the most hilarious of any comedy in the last few years, with every actor perfectly playing into the impression of what audiences think they’re really like. Soon, though, the Rapture arrives, leaving Rogen, Baruchel, Franco, Robinson, and Hill alone and barricaded inside Franco’s mansion while hellfire rains outside.

For a while, Rogen and his pals get significant mileage out of their end-of-the-world scenario and it’s quite enjoyable to watch them react exactly how we believe they would under the situation. By the second half of the movie, though, the laughs are fewer and farther between – and none of them end up matching the ribald hilarity of the opening 20 minutes.

As the final act arrives, the movie suffers from the same malady Pineapple Express did: whereas Pineapple Express left the comedy behind and got caught up in barn explosions and chest wounds, This is the End loses its way in an unfunny mess of sexual assault, cannibalism, and CGI phalluses.

Part of the problem is that a comedy about being left behind after the Rapture is somewhat handcuffed into a less-than-happy story. A larger part of the problem is simply that without any heart or honest emotion beneath the puerile humour, This is the End ultimately feels more like an Adam Sandler movie than a Judd Apatow one.