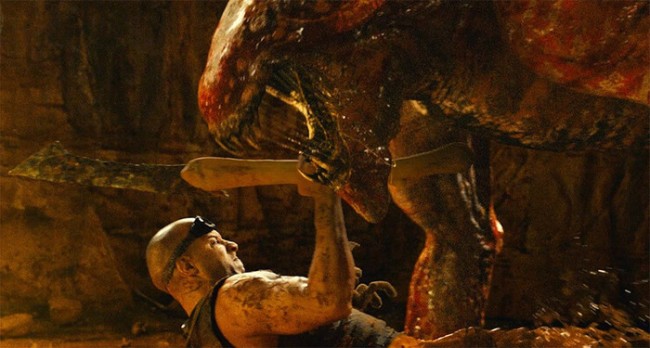 Riddick has much in common with another recent movie: the Tom Cruise-starring Oblivion. Both are sci-fi movies without a single original thought, which steal liberally from other movies. The main difference between the two is that Oblivion, for all its unoriginality, was one of the most visually spectacular movies of 2013. Riddick, on the other hand, has directing, acting, and visual effects as weak as its writing.

If you’ve never seen Aliens, the Jurassic Park trilogy, the Lord of the Rings trilogy, Flash Gordon, Robinson Crusoe on Mars, The Lion King, Jason X, The Road Warrior, Predators, 1999’s The Mummy, Starship Troopers, or Pitch Black, you’ll likely find Riddick an inventive and thrilling piece of cinema. The more of those you’ve seen, though, the less there is to appreciate here.

The character of Richard B. Riddick originated in 2000’s Pitch Black, in which the arrested Riddick crash-landed with his captors on a hostile planet and survived being hunted by aliens using his memorable night-vision eyes. It wasn’t the best thriller of the year, but it was an entertaining enough thrill ride that launched Diesel’s career. The 2004 sequel, The Chronicles of Riddick, was more bloated, less original, and an outright worse movie. Riddick marks the lowest point yet for the series.

The plot involves Riddick being stranded alone on a foreign planet and struggling to survive with his alien-hyena pet. No, wait, it’s about duelling teams of mercenaries hunting him down. Scratch that, it’s a survival story of a small group of people battling a horde of swarming aliens. Riddick’s story is unbelievably aimless and completely unsure of what it wants to be, which is symptomatic of its quilt-work writing.

There were two other people sitting in the theatre where I saw Riddick, and they spent the second half of the movie mocking it mercilessly. Their commentary proved infinitely more entertaining than the movie itself. “This is probably the worst movie of all time,” one of them muttered at one point. It may not be that bad, but Riddick just might be the worst movie of the year.