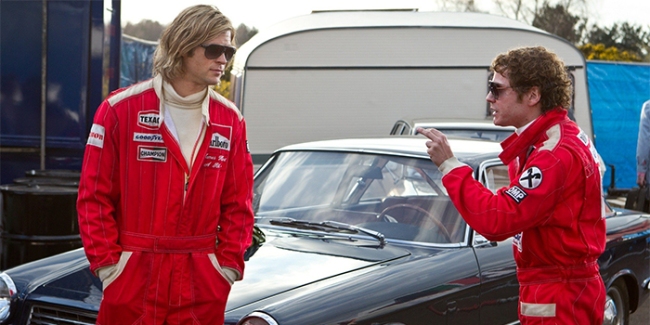 Sports movies have a tricky line to walk. They have to satisfy fans of the sports who will scrutinize them for any errors, while remaining easy enough to understand for casual moviegoers who aren’t invested in the sports. As movies like The Pride of the Yankees, Raging Bull, and Rudy have proven, the trick is to make the movie more about the characters than the game itself. Rush knows this very well.

Athletes of single-player sports always give their best performances in the midst of a rivalry. (Think of Muhammad Ali and Joe Frazier, Andre Agassi and Pete Sampras, or even Sammy Sosa and Mark McGwire.) Formula One racers James Hunt (Chris Hemsworth) and Niki Lauda (Daniel Brühl) had one of the best.

Hunt is a cocksure playboy who drives by the seat of his pants and survives through instinct and adrenaline. Lauda, on the other hand, is meticulous, ill-tempered, and spends every minute not racing preparing for his next race. As they compete for the F1 World Driver Championship, Hunt and Lauda become locked in a bitter battle that is both tragic and inspirational.

Hemsworth does a wonderful job hinting at the sadness and loneliness lurking just below Hunt’s surface and giving us glimpses of why he lives for the danger of dying. (One of the best lines of the movie is his: “Don’t go to men who are willing to kill themselves driving in circles, looking for normality.”)

The real star of Rush, though, is Daniel Brühl, who steals every minute of the movie he’s in. His fascinating portrayal of the impossibly difficult but irritatingly superior Lauda is revelatory and on the same level as Jesse Eisenberg in The Social Network or Hugh Laurie in House. Brühl may as well start looking for a tux for Oscar night, because his performance is all but guaranteed a nomination.

Rush’s racing scenes are thrilling in a way too few movies have been this year, with director Ron Howard using his masterful skill to keep you pinned in your seat. Combined with the outstanding acting and Peter Morgan’s smart screenplay, it’s a nearly perfect package. Best of all, it works just as well if you’re a racing expert or if you don’t know your NASCAR from your F1. Rush is the rare sports movie that everyone can appreciate.