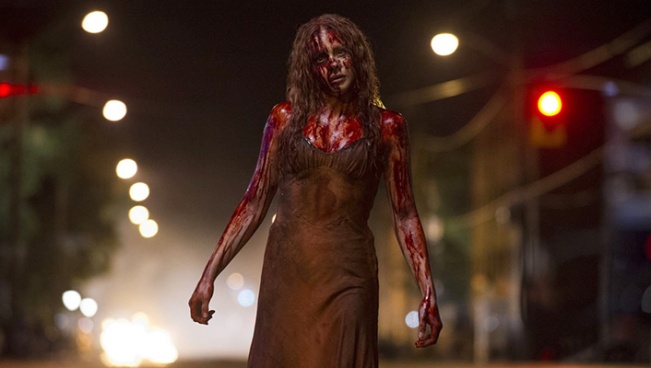 As blasphemous as it is to say, 1976’s Carrie is not a great movie. Most of the acting is either wooden or exaggerated, its symbolism is overtly obvious, and it takes a long time for much of significance to happen. The one thing it does fantastically, though — so well, in fact, that many call Carrie a masterpiece — is deliver an emotional payoff.

Carrie is mostly remembered for its prom-set ending, when the bullied teenager and fledgling telekinesist gets her revenge. After audiences spend over an hour watching Sissy Spacek’s meek protagonist being tortured at school and at home, the sense of vengeance and justice that is unleashed at the climax is nearly palpable. The two keys to that were the over-the-top tone of the characters and the twisted eye of director Brian De Palma. Both are sorely missed in this remake.

While nothing new happens in the first half of the movie, the script makes sure to throw modern affects into the script to try to appeal to teenagers. (“Look, they’re filming Carrie’s bullying on a cell phone!” “Hey, they uploaded their video to YouTube, just like I do!”)

Chloë Grace Moretz plays a Carrie White for the modern age. She’s less naïve and more strong-willed, but still tragically meek. Moretz is certainly fine in the role, but it’s a real waste of her talent. Besides Moretz, the only other actor who seems to understand the right pitch at which to play her character is Judy Greer as Carrie’s sympathetic gym teacher.

Carrie’s fanatically religious mother (played now by Julianne Moore) and the popular kids at school who bully Carrie are meant to be unlikeable people. The original knew this and purposely amped their traits into caricature territory to make them despicable. This version doesn’t go far enough with it, though, which makes things emotionally tricky as later plot points arise.

There are differences in the plot of this remake, but they won’t be spoiled here. While the alterations often a slight change of pace, they slow down a movie that really shouldn’t feel anywhere near as long as it does. And some of the changes are just laughably bad.

Director Kimberly Pierce is an adequate director, but she has very little style – which is one thing nobody could accuse Brian De Palma of having. The dull scenes in the original still found ways to entertain through De Palma’s crazy direction and eye for odd camera angles. When Pierce isn’t aping De Palma’s shots, though, she has no eye of her own.

There’s lots of blood and plenty of intended emotion, but the movie’s ultimately as stiff as the dead and as poorly made as a soap, at times. If Lifetime Television made horror movies, Pierce’s remake of Carrie feels like it would be one of them.