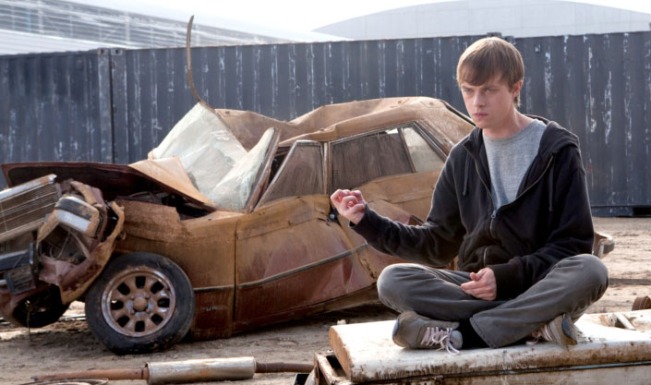 (Curious about why certain movies were chosen or ranked as they were? Click here. And be sure to check out Part 1.)

A loose adaptation of Shakespeare’s “The Tempest,” Forbidden Planet contributed a number of firsts to the sci-fi genre. It was the first movie to show people flying in a spaceship of their own design, the first to be set entirely on another world, and the first to have an entirely electronic score. It also influenced everything from Lost in Space (especially its robot) to Star Trek. (Gene Roddenberry often talked about how his vision for Star Trek was shaped by watching Forbidden Planet.) The story involves a rescue attempt on an alien planet after communications are lost with the on-planet colony. When the rescue team arrives, they find all but two of the people have been killed by a monster. Not everything is as it seems, though, with one of the two survivors especially unhappy about their rescuers’ arrival. Forbidden Planet is also notable for featuring one of Leslie Nielson’s biggest roles, before he shifted from dramatic acting to comedy.

Long before 1997’s Face/Off, a trio of movies in the ‘60s dealt with the idea of face transplantation, including Eyes Without a Face and The Face of Another. Seconds proved to be the best of the bunch. Directed by John Frankenheimer (who’d also crafted the masterful paranoia thriller The Manchurian Candidate), Seconds tells the gripping tale of Arthur (John Randolph), who is blackmailed into undergoing a radical surgery and starting a new life as a completely different person. (The premise sounds ridiculous at first, but as details are slowly revealed over the course of the film as to why he was chosen, everything makes a twisted kind of sense.) Post-surgery, Arthur is given a new identity as Tony (Rock Hudson), but has trouble acclimating himself to his new life. He begins acting out in worse and worse ways, finding himself unable to live as Tony and unable to return to being Arthur. From start to finish, Seconds is a disturbing thriller that grips you and refuses to let you go, right up until the fittingly creepy ending.

In the midst of the world’s fears over nuclear testing, a bevy of cautionary tales came out in the ‘50s involving irradiated creatures, from Gojira to Tarantula. Them! is another of the same scenario, but is also one of the best action movies of its time. When an atomic bomb is dropped in the New Mexico desert, an anthill in the vicinity is caught in the radiation, causing the ants to grow to the size of buses and attack the nearby town of Alamogordo. Much like Jaws, the ants aren’t explicitly shown until nearly halfway through the movie. In fact, Them!’s plot structure, character types, and pacing influenced countless action movies, like Aliens, Men in Black, Super 8, and especially Jurassic Park. The movie’s effects may seem hokey by today’s standards, but they were very clever for its day and it’s not hard to admire how creative the makers of the movie were with blending different visual effects techniques to achieve one of the genre’s best monster movies.

Superhero movies aren’t generally thought of as science-fiction (and, to be fair, many of them aren’t), but the story of Peter Parker and the aftermath of his being bitten by a radioactive spider is just as classically “sci-fi” as Them! or The Fly. While 2002’s Spider-Man was a perfectly good movie, it wasn’t until the first sequel that the character was used to its fullest potential. Forced to put aside his personal happiness for his obligation to help others, Spider-Man 2 finds Peter (Tobey Maguire) dealing with sacrifices and tragedy on every front, including a mentor gone crazy. Dr. Otto Octavius (a very sympathetic Alfred Molina) has invented a set of four robotic arms that attach to his spinal cord, but when the computer chip in them gets fried, he loses the ability to control both them and himself. Every stake from the first Spider-Man is raised and the action reaches its perfect pitch. Short of The Dark Knight, Spider-Man 2 remains the best modern superhero movie and one of the best sci-fi actioners of the last decade.

Many science-fiction movies with twist endings, like Planet of the Apes or Vanilla Sky, are more remembered for the twists than the movies themselves. Soylent Green is one of those movies. (Don’t worry; no spoilers ahead.) The crime is that often, these movies are much better than just the endings, which is also true of Soylent Green. A story about a future where overpopulation runs rampant and everyone is addicted to rations of a food substance marketed as Soylent Green, the film is the type of paranoid conspiracy thriller that was everywhere in the ‘70s. With just a clever story, the movie would be entertaining enough, but what helps make it classic is its gritty visual style, moving combinations of picture and music, and a desperate performance by Charlton Heston that is less campy than many people remember. Best of all, much like already knowing the truth about Darth Vader before watching The Empire Strikes Back, Soylent Green still works well if you know how it all ends.

Much of Arnold Schwarzenegger’s output in the ‘80s wasn’t quality cinema. Besides The Terminator, Schwarzenegger hadn’t made a really great movie as of 1990. Adapted from author Philip K. Dick’s short story “We Can Remember it For You Wholesale,” Total Recall was his first masterpiece. Taking place in a future when memories can be purchased and implanted directly into one’s brain, Douglas Quaid (Schwarzenegger) decides to escape his boring life by getting memories of a secret agent’s mission on Mars implanted in his head. The procedure goes wrong and Quaid changes his mind, but he suddenly finds himself attacked and chased by shady figures who seem to be trying to kill him. How much of it is actually real, though? The questions Total Recall raises, both existential and narrative, are skilfully handled by director Paul Verhoeven (RoboCop, Starship Troopers) and the twists in the plot never fail to surprise. With revolutionary visual effects and a fascinatingly original story, Total Recall remains one of Schwarzenegger’s best movies and one of the best sci-fi guessing games.

Invasion of the Body Snatchers is one of the rare movies that was trumped by a superior remake but it remains a classic in its own right. One of the quintessential body-possession movies, the 1956 Invasion of the Body Snatchers focuses on Miles (Kevin McCarthy), a small-town doctor who keeps hearing from patients who feel their friends and family members are being replaced by impostors. (Pointless spoiler alert: They are.) Much of what became staples of sci-fi thrillers originated here, from “pod people” to characters needing to stay awake to avoid falling prey to attack. The 1978 remake had more of a disturbing, nightmarish tone, but the original is more of a conspiracy thriller, as one man slowly comes to horrifying revelations and desperately tries to get people to believe him. It may not have the lasting images or scares of the remake, but 1956’s Invasion of the Body Snatchers is a nearly perfect sci-fi thriller that stands apart from much of what filmmakers dared to do in the ‘50s.

Not to be confused with the terrible 2008 remake starring Keanu Reeves, the original The Day the Earth Stood Still was one of the first movies to use the genre to address serious contemporary issues – in this case, nuclear weapons and mutually assured destruction – and it remains one of the most important. When a flying saucer lands in Washington, D.C. and alien Klaatu (Michael Rennie) emerges, he reveals that he is on a mission of galactic goodwill. Any planet that develops atomic power is visited by a representative of more advanced planets and warned about the power being used for violence and destruction. If, once space travel is achieved, humans decide to take the power of atomic bombs off the planet, Earth will be destroyed in an pre-emptive act of preserving life on other worlds. The moral message in The Day the Earth Stood Still walks just the right balance between subtlety and overtness, leaving a lasting philosophical impression on anyone who watched it at the time or who watches it today.

Terry Gilliam, the animator for anything Monty Python-related and the director of bizarre gems like Brazil, Time Bandits, and Fear and Loathing in Las Vegas, has always had a twisted look at filmmaking. Much like Tim Burton, Gilliam’s eye for the beauty in weirdness and his penchant for whimsy often hold him back from greatness. 12 Monkeys is his opus, not to mention one of the greatest time-travel movies. When a man from the diseased and dying future is sent back in time to prevent a viral outbreak, he is arrested and thrown into a mental institution when he starts screaming about the future. Jumping around in time, James Cole is one of the best roles Bruce Willis has had. Brad Pitt’s Oscar-nominated performance as a fellow patient at the hospital where Willis is committed is also proof that Pitt can act with the best of them. Gilliam’s peculiar dystopian vision, Pitt’s bonkers performance, and the ingeniously labyrinthine screenplay all fold into an incredibly memorable movie.

Much like lens flares and 3D post-conversion, the trend of handheld filmmaking is maligned by many people. Even movies that critics have applauded, like The Blair Witch Project, Cloverfield, or Paranormal Activity, are disliked by many simply for the format. Chronicle is likely not going to change anyone’s minds about the technique. Unlike a lot of movies that strain to shoehorn the handheld format into them, though, it makes perfect sense here, as it documents three high school students who discover a meteor and slowly begin to find they’ve gained the power of telekinesis. What begins with using the skill just for dumb pranks takes a dark turn when one of the three begins giving into his vengeful side and using his powers to vent his frustrations. The escalation in the movie’s plot is remarkable and the sheer scale of the climax when compared with the humble opening scenes is staggering. The special effects are insanely good, considering the movie’s small budget. Chronicle is handheld filmmaking at its finest and a great way to tell a modern sci-fi story well.