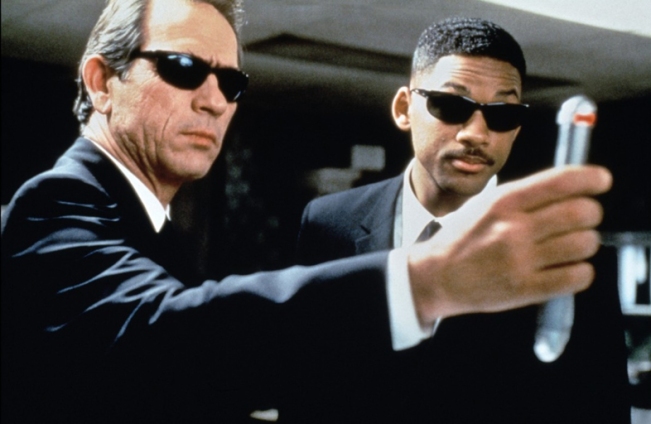 (Curious about why certain movies were chosen or ranked as they were? Click here. And be sure to check out Part 1 and Part 2.)

After the underappreciated Star Trek: The Motion Picture, Paramount Pictures changed the tone completely for the sequel and made the best Star Trek movie of the original six. Watching Star Trek II: The Wrath of Khan is like watching Raiders of the Lost Ark or The Empire Strikes Back; so many subsequent movies have referenced scenes or lines from it, it’s almost hard to believe watching it now that they all originated in the same movie. Fifteen years earlier, Kirk (William Shatner), Spock (Leonard Nimoy), et al discovered Khan, a genetically engineered despot floating in space. After a bitter battle, Kirk defeated Khan and exiled him on a desert planet. In Star Trek II: The Wrath of Khan, the villain returns and takes calculated revenge on Kirk. The daring narrative choices the movie makes are impossible to predict the first time and hold up perfectly upon subsequent viewings. As fun as the very similar Star Trek Into Darkness was, it doesn’t hold a candle to Star Trek II: The Wrath of Khan.

Remaking 1956’s Invasion of the Body Snatchers was a seemingly dumb idea. The original movie was not only one of the best sci-fi movies of the ‘50s but it had also been a veiled look at the paranoia within the McCarthyism era. Director Philip Kaufman took on the daunting task of modernizing the tale and improved upon a classic. Swapping communist paranoia for post-Watergate/post-Vietnam distrust, Kaufman’s remake (which is also, technically, a sequel to the 1956 movie) goes beyond gripping to frightening. While the original was tense and worrisome, it wasn’t scary. The 1978 version manages to tell a similar story as the original while also sculpting the concept into a truly terrifying ordeal. The film is filled with images that are hard to shake and even harder to forget when you turn the lights off. Featuring excellent performances from Donald Sutherland, Brooke Adams, Leonard Nimoy, and Jeff Goldblum, as well as a heart-stopping ending, the 1978 Invasion of the Body Snatchers is one of the best scary sci-fi movies.

As absolutely perfect a boy-and-his-dog story as E.T.: The Extra-Terrestrial was, there are some people who just couldn’t get into it. For them, there’s The Iron Giant. Neglected by audiences in 1999 (as computer-animated cartoons were the new rage) but applauded by critics, The Iron Giant is the debut feature of Brad Bird. If the name sounds familiar, that’s because he would go on to direct The Incredibles and Mission: Impossible – Ghost Protocol. One thing Bird shows a deftness for in everything he does is balancing emotion and action, which he does masterfully in The Iron Giant. The story of a boy who befriends a giant robot that may or may not be from outer space, The Iron Giant is just as much a communist paranoia thriller, an examination of what defines a monster, and a message that you are whatever you choose to be. The Iron Giant was the last great example of American traditional animation and provides one of the richest emotional experiences (especially in the final act) of any animated movie.

After breaking big with 1984’s The Terminator and 1986’s Aliens, James Cameron wrote and directed The Abyss. More than any of Cameron’s other movies, The Abyss was a direct influence on Titanic; both are movies that have some spectacular action scenes but that, at heart, are love stories. Bud (Ed Harris) is the foreman of an underwater oil-drilling platform who is contacted when a nearby submarine crashes into an unknown object and sinks. A SEAL team is sent down to the platform to investigate the crash, joined by the drilling platform’s designer – and Bud’s ex-wife – Lindsey (Mary Elizabeth Mastrantonio). Together, Bud and Lindsey make a discovery for the ages at the bottom of the ocean – and find non-terrestrial intelligence, too. The Abyss marked the first time a movie was made that took place entirely underwater and also featured one of the milestone leaps for CGI, in the form of the famous “water tentacle.” Cruelly, due to The Abyss originally being turned in by Cameron at 170 minutes, the ending of the movie was basically lopped off before its release, which left many audiences who viewed it nonplussed and confused. The restored Special Edition is the essential version to watch, as the ending not only has some incredible visual effects but also rewards everything the plot naturally builds toward.

Yes, it’s the same plot at Dances with Wolves. And Pocahontas. And The Last Samurai. And every other movie where a colonizing military man falls in love with the values of a native tribe and takes up arms against his former colleagues. But clichés are clichés for a reason: when they’re done well, they work. Directed by one of the masters of science-fiction, James Cameron’s Avatar works. In this interpretation of the tale, the protagonist is Jake Sully, a paraplegic marine who volunteers to take his twin brother’s place on a mission to the recently colonized planet of Pandora. The native species of the planet, the Na’vi, is standing in the way of the military’s mining progress, so they’ve genetically grown Na’vi bodies that can remotely sync with the minds of human soldiers. Jake, undercover in his Na’vi avatar, falls in love with the Na’vi princess Neytiri (Zoe Saldana) and slowly realizes he’s fighting for the wrong side. By swapping horses for dragons and Native Americans for aliens, Cameron finds a fresh way to tell a still-important message about Imperialism, human rights, and morality.

Science-fiction is a genre with so much flavour on its own, it doesn’t always mix well with others. The same often goes for comedy. Good sci-fi comedies are rare, because not only do that have to be intellectually stimulating and clever but they need to be funny and light-handed, as well. One of the best successful examples is Men in Black, Barry Sonnenfeld’s tale of a secret government agency tasked with protecting the planet from outside threats and monitoring alien life on Earth. Hot off his turn in Independence Day, the charming Will Smith is perfectly cast as J, the new MIB hire, who’s partnered with the hysterically stoic and deadpan Tommy Lee Jones as K. When a giant bug from outer space crashes on Earth looking for a missing galaxy and murdering people in his path, agents J and K are tasked with hunting him down. With memorable plot inventions like the neuralyzer and the noisy cricket, as well as a ridiculously sublime performance by Vincent D’Onofrio as the bug in human form, Men in Black walks a tricky line masterfully.

Much like Soylent Green, Planet of the Apes is a movie cruelly misremembered just for its ending. The climactic image and Charlton Heston’s ensuing “Damn you!” outburst have been showcased and parodied more times than most scenes throughout cinema, but Planet of the Apes is so much more than that. Co-written by Rod Serling, the creator of The Twilight Zone, and Michael Wilson, the writer behind such epics as The Bridge on the River Kwai and Lawrence of Arabia, the movie’s screenplay is a deft blend of head-trip scenarios and scenic grandeur. Astronaut George Taylor (Heston) and his crew are in hibernation on a ship and travelling at the speed of light when their ship crashes on an alien world. On this Bizarro Earth, apes are the ruling species and humans are their oppressed slaves. After being captured and imprisoned by Dr. Zaius (Maurice Evans), Taylor escapes in search of answers and a way home. The ultimate answer he finds provides such a powerful ending, it spawned a franchise that’s still going strong nearly 50 years later. Despite its dilution through sequels, prequels, and remakes, though, it shouldn’t be forgotten just how remarkable a movie the original Planet of the Apes is.

It’s painful sometimes to remember what foreign films looked like when (or, usually if) they were released in North America just a few decades ago. Nowadays, foreign movies can be seen as they are made, but merely twenty years ago, it was hard to see a movie in a language other than English. If an American studio really wanted to show a non-American movie, they often dubbed over the dialogue or inserted Raymond Burr into the picture. Nausicaä of the Valley of the Wind, the first masterwork from Hayao Miyazaki (My Neighbour Totoro, Princess Mononoke, Spirited Away) was original released in the US and Canada as Warriors of the Wind, a heavily edited version with different character names and large segments of the plot removed. The restored version available to audiences now is proof that English is not always better. A post-apocalyptic tale of warring tribes, scorched Earth, a brave princess, mutant insects, and the self-repairing nature of nature, Nausicaä of the Valley of the Wind is Miyazaki’s finest hour. It presents a similar moral as Planet of the Apes or WALL-E do, but using more excitement and splendour than many of its ilk. It’s a thrilling action movie, an inspirational tale for children, and a stunningly beautiful piece of animation.

Tim Allen is an actor that many people like to dislike. Sure, everyone enjoys him as Buzz Lightyear, but lots of people dislike almost everything else he does, since they feel he does the same shtick in everything from Home Improvement to The Santa Clause. One of the exceptions to that presumption is the immensely clever and riotously funny Galaxy Quest. Alongside Sigourney Weaver, Alan Rickman, and Sam Rockwell, Allen plays a cast member of a ’70s sci-fi TV series that has been obsessed over by geeks and worshipped by fanboys for decades. (Sound familiar?) Meanwhile, in space, the 20-year-old show’s broadcasts have reached a besieged alien species that don’t understand what fiction or TV shows are. The aliens come to Earth and recruit the actors to fight their war for them; the actors agree, thinking it’s a gig and not an intergalactic battle. Galaxy Quest’s premise is rich with comedy, its satire of Star Trek and fandom is razor-sharp, and the sporting cast perfectly commits to the hilarious lunacy of the plot. There are few sci-fi comedies this laugh-out-loud funny – even for those who normally avoid Tim Allen movies.

Before Pacific Rim and Cloverfield, before Jurassic Park and Them!, before Gojira and Mighty Joe Young, there was King Kong. The progenitor of almost every action movie and monster flick made since, 1933’s King Kong is delightfully inventive and still quite thrilling 80 years later. Remade in 1976 and again in 2005, King Kong tells the tragic tale of Carl Denham (Robert Armstrong), a movie producer looking for his next big hit; Ann Darrow (Fay Wray), an actress desperate for a break; Jack Driscoll (Bruce Cabot), the first mate of a chartered ship; and Kong, a giant gorilla that is tragically doomed by falling in love. Kong resides on an uncharted island, the focus of worship by the natives there. When Denham and his crew find Kong, much chasing and action ensues, before Kong is captured and brought back to New York City. (Eighty-year-old spoiler alert: Kong escapes.) The special effects in the movie work not just through the charm of how primitive they are, but also as they’re meant to affect audiences: all these years later, King Kong is still remarkably gripping. It’s also wondrous that for such an outlandish premise, the emotions coursing through, from the opening act to the tragic ending, are hauntingly resonant.