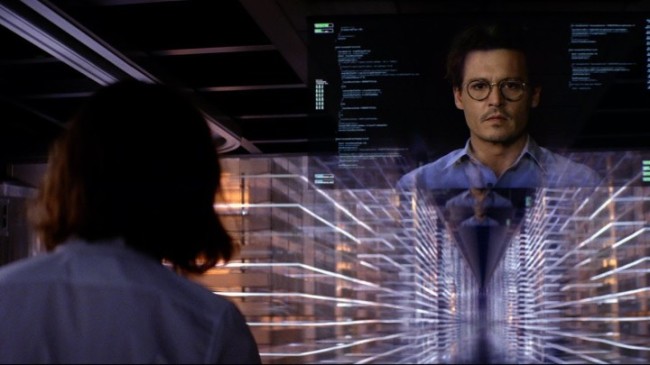 Movies about self-aware computers or technology with superior intelligence are nothing new. From 2001: A Space Odyssey to Tron to Terminator 2: Judgment Day to The Matrix to Her, the concept has been thoroughly explored, and already to brilliant results. Transcendence doesn’t rise to the ranks of those movies, although it’s clever enough to at least see its ridiculous premise through to a (relatively) realistic and well-earned conclusion.

Will Caster (Johnny Depp) is a world-famous doctor and lecturer on the subject of A.I. and sentient computers. His wife Evelyn (Rebecca Hall) and best friend Max (Paul Bettany) are also scientists and researchers on the subject. After giving a speech at a fundraiser to try and earn sponsors for their self-aware computer project, an anti-A.I. extremist attempts an assassination of Will.

Will survives the shot, but the bullet is found to have been laced with a lethal dose of radiation, leaving Will with only weeks left to live. Evelyn decides to upload Will’s consciousness into the sentient computer she, Will, and Max were developing. Sure enough, it works, and soon Will is living inside a machine and communicating with Evelyn like a constantly re-buffering Max Headroom.

After a while, Will decides he needs access to more information and other computers, leading to Evelyn connecting him to the Internet – much to Max’s objections – and starting them each down paths that cannot end well for anyone. (Will’s plan also involves nanotechnology, a solar panel field, and a research facility five stories below a dying, desert town.)

Transcendence is the directorial debut of Wally Pfister, who cut his teeth as the cinematographer of Memento, The Prestige, Inception, and the Dark Knight trilogy. Much like fellow cinematographers-turned-directors Jan De Bont (Speed) and Barry Sonnenfeld (Men in Black), Pfister knows his way around helming a movie. What Pfister doesn’t appear to yet know is that a weak script can only make so good of a movie.

The screenplay for Transcendence does a lot right. (For one thing, instead of trying to rush the plot, the film’s story is covered over a span of five years.) Sadly, though, pretty much everything that it does do poorly, it does in the first half-hour of the movie. Without a solid foundation, the movie can’t completely rise to its potential.

It does an admirable job, bearing in mind the dumbness behind its premise. The remaining two-thirds of Transcendence are about as good as they can possibly be, considering its shoddy setup. Ultimately, though, it’s a commendably good movie that just can’t transcend its own script to reach the greatness of its ancestors.