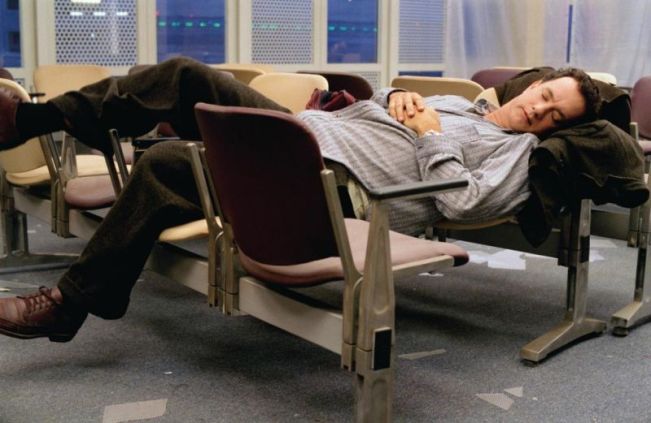 Chronology: The Terminal re-teamed Spielberg with Tom Hanks after their prior Catch Me If You Can. The next year, Spielberg would deliver War of the Worlds and Munich.

Premise: When his passport is revoked through a bureaucratic tangle, Viktor Navorski (Hanks) becomes stranded in New York’s JFK Airport. Unable to return to his home country but unable to re-enter the US, Viktor builds a life in JFK, including making friends, landing a job, and falling in love.

Father Issues?: Viktor’s father’s life goal was to get signatures from all 57 jazz musicians in a famous photograph, but he only got 56 of them; Viktor picks up the effort to get the last signature

War?: Viktor’s passport is invalidated after civil war breaks out in his home country

Aliens?: Does an illegal alien count?

Fun Fact: The airport set was constructed with location-accurate, licenced businesses and restaurants, some of which actually functioned, for the actors and crew to make use of in between shots.

Best Line: “You told me you were delayed! You never said it was for nine months!”

Verdict: The Terminal is one of Spielberg’s lighter movies (both in subject matter and tone), but also one of his most enjoyable. Hanks has fun as Viktor and Tucci is excellent as a villainous US Customs official. Its biggest problem is that it treats itself so irritatingly lightly, the movie almost floats away.