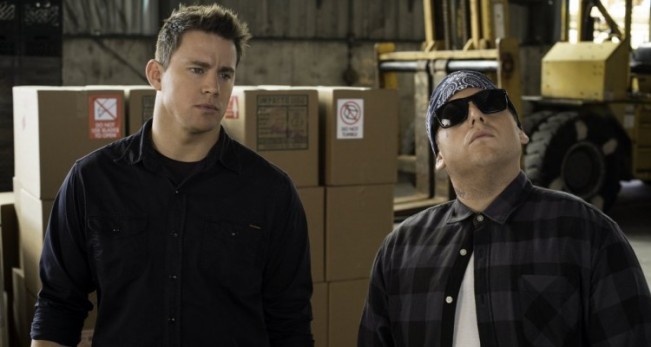 Remember when your parents told you to make fun of yourself before your bullies could, to deflate their insults? Someone told that to 22 Jump Street, too. It’s got some problems and much of it isn’t very original, but before you can even roll your eyes at the ridiculousness of its stupid premise or clichéd plot contrivances, the movie’s already making the joke. 22 Jump Street may be the most meta movie since Adaptation. and the most self-aware comedy since the Wayne’s World movies.

While the ‘80s TV series on which the movies are based was treated seriously, writer-directors Phil Lord and Christopher Miller (Clone High, Cloudy with a Chance of Meatballs, The LEGO Movie) smartly turned 21 Jump Street into a sublime comedy, well aware that its concept of undercover cops in high school was ripe for mockery. It also showed the world that Channing Tatum could hold his own against Jonah Hill comedically, which was a pleasant surprise to many.

Now that they’ve done the high school thing, 22 Jump Street fulfills the tease at the end of the first movie by sending Schmidt (Hill) and Jenko (Tatum) undercover in college. After stating in its opening 15 minutes that people just want more of the same and for Schmidt and Jenko to just repeat what worked for them the first time, the movie spends most of its remainder making veiled comments about the film’s budget and ripping on every instance that something happens just like it would in a movie.

It’s very hard to critique a movie that wears its stupidity and unoriginality as a badge of honour, other than to commend it on its intelligence and cleverness, which 22 Jump Street has in spades. The movie seems like it should run out of steam, but it never comes close. It’s also remarkably funny, toggling between call-back jokes that recycle from the first movie and meta references that do everything short of breaking the fourth wall.

Hill, Tatum, Ice Cube, and Nick Offerman are all just as funny the second time around, if not occasionally more so. While Brie Larson, Ellie Kemper, and Jake Johnson may be gone this time, the sequel has the fortunate additions of Amber Stevens, Patton Oswalt, Peter Stormare, and Jillian Bell. Bell, in particular, is curiously hysterical as the roommate of Schmidt’s love interest (Stevens), with an inimitable delivery, awkward physicality, and endless, deadpan insults about Schmidt’s age.

22 Jump Street delivers exactly what fans of 21 Jump Street wanted. It’s more of the same, but unlike most auto-piloted sequels, it has its cake and eats it too by ridiculing its own weaknesses. It never quite reaches the heights of riotous hilarity of 21 Jump Street, but it also has nothing as disappointingly puerile as the gross ending of the first movie. 22 Jump Street is very smart about how stupid it is, which makes for great, self-aware comedy in a sequel that purposely copies the original yet still manages to be just as good.