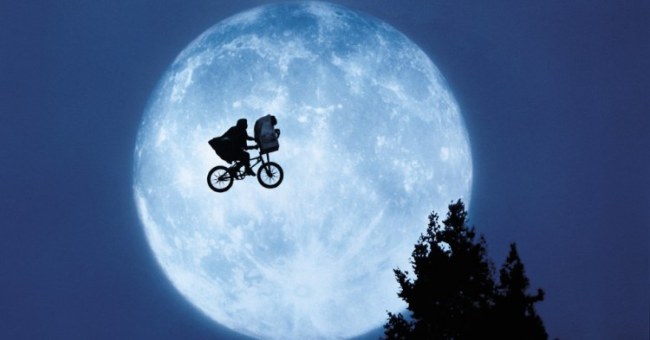 Chronology: Spielberg followed up his massive hit Raiders of the Lost Ark with the even bigger splash that was E.T.: The Extra-Terrestrial, before making Indiana Jones of the Temple of Doom two years later

Premise: A modernization of the archetypal a-boy-a-his-dog story, lonely boy Elliott (Henry Thomas) discovers a stranded alien child left behind on Earth and takes care of him, forming a powerful friendship in the process

Over two hours?: Just a little under

Father Issues?: More than almost any other Spielberg movie. Elliott’s father is no longer part of their family and every male adult in the movie plays a villainous role

War?: Not this time

Aliens?: It’s called E.T.: The Extra-Terrestrial. Yes, there are aliens.

Fun Fact: The original script called for Elliott to use M&Ms to lure E.T. into his house, but Mars refused to give permission for their chocolates to be used. Reese’s was more than willing to allow their newly introduced Reese’s Pieces to be used, though. After E.T.: The Extra-Terrestrial was a global smash, sales of Reese’s Pieces went through the roof, cementing the candy’s popularity for the decades since.

Verdict: The genius and power of E.T.: The Extra-Terrestrial is that while it stars a child, the movie appeals to everyone. Kids enjoy it because they can relate to the point-of-view of Elliott, but adults love it because it has a magic in it that makes grown men and women feel like children again. No matter how old you are, when you sit down and watch E.T.: The Extra-Terrestrial, you can’t help but feel like a wide-eyed child, filled with wonder at the spectacular storytelling and adventure contained within one of the most emotionally powerful movies the sci-fi genre has given audiences.