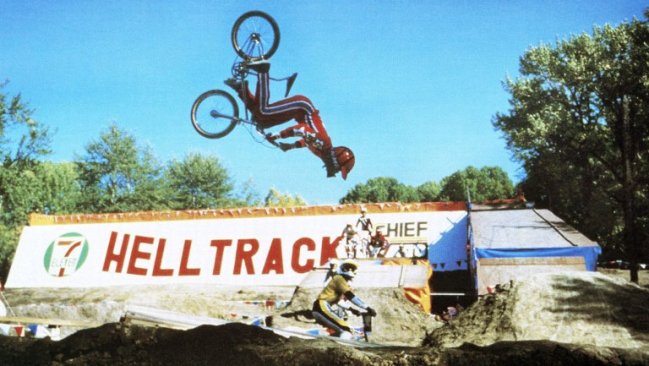 A long, long time ago, there was a wonderful decade called the ‘80s. It was a time of big hair, bright colours, and over-synthesized pop soundtracks. In the middle of this decade, someone in Hollywood had a great idea: ‘Hey, let’s make Rocky for teenagers!’ They did, and called it The Karate Kid.

While it didn’t make all the money in 1984, it did make enough to be the fifth-highest grossing movie of the year. This, no doubt, played a factor when someone then suggested: ‘Hey, let’s make The Karate Kid, but with BMX bikes!’

If you follow where I’m going, it should be no surprise that RAD is made of nothing but recycled parts, stripped of anything remotely offensive, sterilized, and aimed squarely at kids. Since I was four when it came out and discovered it shortly thereafter on a VHS tape, I lapped this movie up as a kid.

As an adult, it’s a different viewing. I can’t help but notice its incredibly weak screenplay, brought to life with some of the worst performances ever to grace the screen. Lead actor Bill Allen (playing Cru, the responsible kid with a devil-may-care attitude who only wants to ride his bike) comes across as so wooden, you could build a chair with him. Lori Loughlin just stands there, looking pretty, and falls for Cru because that’s the only thing the story needs her foe.

The lack of care and attention to RAD’s characters add up to big, dramatic moments that play as unintentional comedy. Veteran hands like Talia Shire, Ray Walston, and Jack Weston alternately stand around looking bored or chew the scenery.

But this parade of awfulness only exists when there are no bikes on screen. The racing scenes are so awesome, even the atrocious soundtrack can’t detract from them. As directed by Hal Needham, the mastermind behind Smokey and the Bandit and Cannonball Run, the BMX scenes crackle with energy. Needham knows when to amp up the suspense and spectacle.

The finale, where Cru competes in the Helltrack race, has high enough stakes and just the right amount of intensity to fool the viewer into thinking that the inevitable outcome may not be so obvious. Another awesome scene is involves Cru and Christian invading the local youth dance on their bikes and perform a bike-trick dance to Real Life’s “Send Me an Angel.” It may sound hokey, but it’s graceful in the way it’s shot, edited, and performed.

As a child, I returned to RAD over and over again for that dance and for Helltrack. Thirty years later, those two sequences still deliver and, on their own, make RAD something worthy of at least one viewing — if not many.