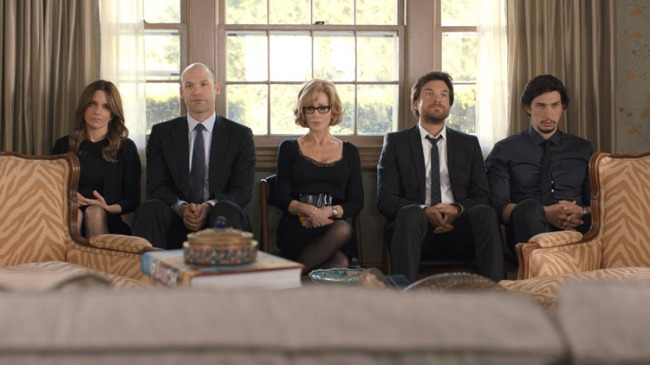 The premise is simple enough: Four grown-up siblings and their mother agree to spend one week in the same house, as the request of their just-deceased father. While the house-arrest premise has been done in myriad ways already, This is Where I Leave You has better acting than any of its brethren and a screenplay that, for the most part, smartly sidesteps the predictable.

Judd Altman (Jason Bateman) finds out about his father’s death right after discovering that his wife has been cheating on him for a year with his boss. He agrees to sit Shiva with his three siblings: Wendy (Tina Fey), a middle child with two of her own; Paul (Corey Stoll), the oldest, looking to take over his father’s business; and Philip (Adam Driver), the baby in the family who remains a mama’s boy.

As the week begins, Judd, Wendy, Paul, and Philip each have latent baggage with each other, but seven days leaves plenty of time for rekindling friendships and discarding grudges. The matriarch of the family, played by Jane Fonda, also has some emotionally pivotal moments of her own — in between awkward moments bought about by an extreme boob job.

The first half of This is Where I Leave You is fantastic. Even moments that are vaguely familiar from other movies seem fresh again. As the movie goes along, more and more plot points seem too paint-by-numbers and predictable, to a point the movie threatens to shake apart. Thankfully, the cast is so excellent, they keep the film going through its slightly dumber climactic moments, to a resolution that’s generally predictable but still quite satisfying.

Bateman is excellent as Judd, giving one of his more complex film performances. When you learn new things about the character, they feel less like inventions of the script than previously unknown aspects of a real person. Driver is also fantastic, delivering most of the movie’s laughs and gleefully bouncing between honest drama and goofy comedy.

Stoll does a lot with the least visualized of the four siblings, but it’s Fey that struggles most. As great as the actress is with any of her lines that have the slightest comedic undertone, the two or three scenes that require her to tap into unfunny and painful emotions fail to land because Fey just isn’t there yet as a student of drama, to be able to pull them off. Each time, the movie recovers quickly, but the break in momentum is noticeable.

The entire rest of the cast, including Rose Byrne, Kathryn Hahn, Connie Britton, Timothy Olyphant, and Ben Schwartz, is wonderful. Everyone is clearly enjoying working in such a good collection of actors and they all seem to elevate each other’s game.

Director Shawn Levy is known for family-friendly movies like Cheaper by the Dozen, The Pink Panther, and Night at the Museum, but he bravely explores new territory in the adult This is Where I Leave You and it suits him well. The movie has a few predictable and unrealistic turns near the end, but the game cast largely makes up for the screenplay’s potholes.