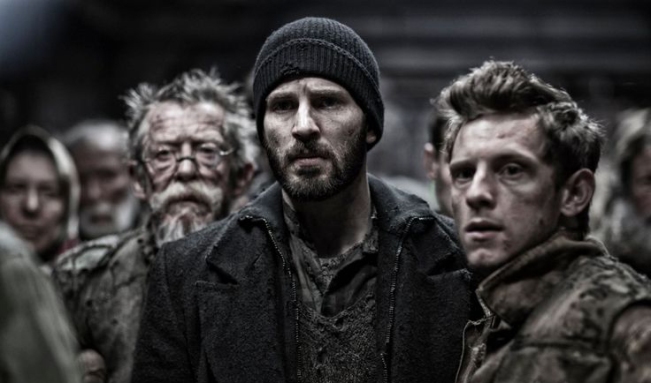 This week’s new releases are Earth to Echo, The Purge: Anarchy, Sex Tape, and Snowpiercer.

Running Time: 91 mins.
OFRB Rating: PG
Starring: Teo Halm, Astro, Reese Hartwig, and Ella Wahlestedt
Verdict: There’s plenty of room for brilliant movies that steal heavily from E.T.: The Extra-Terrestrial — just look at The Iron Giant and Super 8 — but without any heart or artistry, Earth to Echo is the most shameless and soulless rip-off of E.T.: The Extra-Terrestrial since Mac & Me. The tale of three boys (and the requisite sister to one of them) who find a cute, lost alien and help it get home feels like it was created in a boardroom, by studio heads whose only knowledge of children is a presumed love of handheld-camera movies and YouTube videos. Not worth the 90 minutes to sit through. (1½ stars / 5)

Running Time: 103 mins.
OFRB Rating: 14A (coarse language, graphic violence)
Starring: Frank Grillo, Carmen Ejogo, Zoë Soul, Kiele Sanchez, and Zach Gilford
Verdict: The Purge: Anarchy is one of the overall dumbest movies that have been released this year, and it’s all the more disappointing because there are the building blocks of a good movie here. Ultimately, The Purge: Anarchy will quench your bloodlust by the bucketful, if that’s what you’re looking for, but anyone looking for more will find nothing. If you’re one of the many who vicariously loved the senseless violence, gratifying gore, and heartless torture of the original, of course, the sequel has even more of all of that. But if you felt the original had a great premise that ultimately devolved into a gleeful showcase of the very violence it claimed to denounce, you’re going to find The Purge: Anarchy even worse. (1 star / 5)

Running Time: 94 mins.
OFRB Rating: 14A (coarse language, sexual content, substance abuse)
Starring: Jason Segel, Cameron Diaz, Rob Corddry, Ellie Kemper, Rob Lowe, and Nat Faxon
Verdict: For the first half-hour of its running time, Sex Tape is overtly funny and remarkably insightful about adult relationships, in the same way This is 40 was. A third of the way through, though, the movie starts appealing to lower and lower common denominators. Somewhere between the eighteenth plug for Apple and a scene where Jason Segel brutally beats up a dog for at least five minutes, Sex Tape stops trying to be funny and just hopes that you won’t notice it’s on cruise control. Considering it stars the leads of There’s Something About Mary and Forgetting Sarah Marshall, though, it’s almost criminal how unfunny latter two-thirds of Sex Tape is. (2 stars / 5)

Running Time: 126 mins.
OFRB Rating: 14A (coarse language, substance abuse, graphic violence)
Starring: Chris Evans, Kang-ho Song, Tilda Swinton, Jamie Bell, John Hurt, Octavia Spencer, Ewen Bremner, Alison Pill, Ah-sung Ko, and Ed Harris
Verdict: If you can get past the brain-meltingly stupid premise of Snowpiercer, there is a peculiar intrigue to how the movie is filmed, but too many times the movie doesn’t even try to make sense, hoping you’ll be too enraptured by hammy performances from the likes of Tilda Swinton and Ewen Bremner or the hypnotic direction of Joon-ho Bong to care that the movie makes zero sense. The titular train, endlessly circling the globe with the remains of the human race onboard, provides the setting for a blunt, insultingly obvious tale of proletariat revolution. As a ride, Snowpiercer is moderately successful. What strained plausibility in a graphic novel, though, goes beyond the reach of suspension of disbelief as a movie. By default, it’s the best release on DVD this week, but it’s stuffed with style and devoid of substance. (2½ stars / 5)