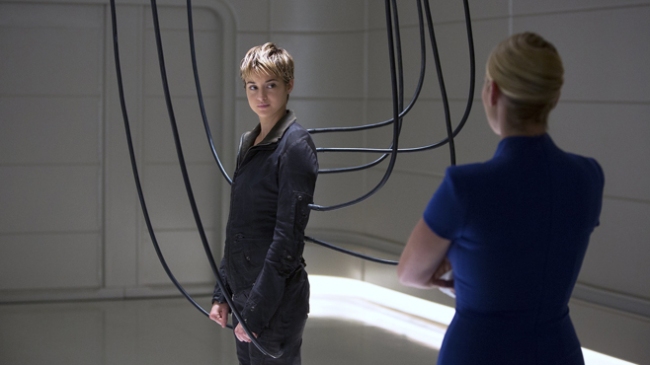 Good movies often have bad sequels. Just as commonly, bad movies beget terrible sequels. But it’s a rare breed that launches a series with a good first entry and then practically kills the franchise entire with the second. The dizzying plunge in quality between last year’s Divergent and its follow-up, Insurgent, is enough to give you whiplash.

The first Divergent introduced a dystopia of a rundown Chicago walled off from its surrounding wastelands and comprised of five factions of citizens, based on one’s propensity for selflessness, bravery, honesty, intelligence, or peacefulness. Those who are found to have more than one of the five dominant traits are labelled “divergent.”

Tris (Shailene Woodley) found herself to be one such person. While hiding her true, multifaceted nature from the brave faction she was trying to blend into, Tris found a kindred spirit in young man named Four (Theo James) and uncovered a conspiracy by the duplicitous leader of future Chicago, Jeanine (Kate Winslet), to brainwash one faction into overthrowing another.

Divergent ended with Tris and Four hopping on a train out of town, alongside Tris’ brother, Caleb (Ansel Elgort), and her sometimes-enemy, Peter (Miles Teller). Insurgent picks up immediately after, as Tris and Four seek asylum from the soldiers chasing them and work to stop Jeanine’s new plan of divergent genocide.

The first movie cribbed heavily from 20th-century dystopian fare written for young adults, but was told in a refreshingly original way. It was four parts The Giver, two parts Brave New World, and one part The Hunger Games, but felt like an original creature and stood on its own. Insurgent, meanwhile, pilfers wholesale and unscrupulously from Harry Potter, Ender’s Game, and Logan’s Run, not to mention every single paragraph of all three Hunger Games books and movies. Extensively.

There isn’t a shred of originality to be found in this mess of a movie, but director Robert Schwentke clearly hoped that if he just kept the action bombastic and kinetic enough, nobody would notice. The occasional entertaining scenes do have effective momentum, if still not an IQ greater than the movie’s total running time.

The “sims” of the movie – simulated tests that exist somewhere between virtual reality and holo-decks – take up whole swaths of Insurgent’s length, and for no justifiable reason anymore. At least in Divergent, they served a narrative purpose. Here, they’re simply a justification for inexpensive CGI every third or fourth scene. The rest of the movie looks better, but just hides a rotten foundation, as barely anything that happens between the opening and closing credits makes a lick of sense.

Oscar nominees Woodley, Teller, and Naomi Watts all deserve better than this, not to mention Oscar winners Winslet and Octavia Spencer. Unlike the Hunger Games series, which has attracted A-class talent due to its strong material and characters, the talented cast in Insurgent feels cruelly stuck in a creative Hell, desperate to quickly churn out the remaining two movies in the saga so they may finally be free of their contracts.

Even holding it up to the standards of a typical sequel, Insurgent is notably bad. But when you think consider the aplomb with which the unoriginal Divergent was crafted into a distractingly entertaining piece of post-apocalyptic sci-fi, it’s truly hard to fathom or forgive how Insurgent, with such a strong setup and such a capable cast, so quickly and so repeatedly goes so awry.