Since the late ‘90s, a rivalry has (falsely) existed between Pixar and DreamWorks Animation, with each studio tackling similar subjects around the same times (Ratatouille and Flushed Away, Finding Nemo and Shark Tale, A Bug’s Life and Antz, et cetera). Now, much as Pixar eventually went from infallible storytellers to an unimaginative sequel factory, DreamWorks Animation has also lost its lustre.

Despite making more and more movies each year (or perhaps because of it), DreamWorks Animation has gone from imaginative fare like The Road to El Dorado and Shrek to the blandly down-the-middle Turbo, The Croods, Mr. Peabody & Sherman, How to Train Your Dragon 2, and Penguins of Madagascar. Despite nothing but pedestrian fare recently, DreamWorks Animation’s never made a truly bad movie in their 17-year history — until now.

Oh (Parsons) is the black sheep of his species, always shunned for not knowing social protocols or being conversationally tactless. After his species invades Earth (abducting and displacing all of humanity), Oh accidentally alerts the brutal species that has been hunting them of their new location, leading to Oh being hunted by his own species, who are sick of his blunders.

Oh bumps into Tip (Rihanna), a human girl orphaned after her mother was shipped off to a segregated human camp. (Yes, this is supposed to be a children’s movie.) They agree to help each other, eventually seeing one another’s point of view, and blah, blah, blah… You know exactly what happens. You’ve seen this story countless times before.

Not only is the plot insultingly unoriginal, it’s incompetently executed. At best, Home is mildly annoying; when it dips to its eye-rolling worst, it will make you struggle to fathom how a movie that so many people worked on for so many hours over so many years could be as poor as it is.

The dialogue is as awkward and borderline offensive as Jar-Jar Binks’ in The Phantom Menace, with lines like “I has made now a few mistakes” or “I, too, has to break the pee” polluting every conversation. Home’s plot ditches characters and subplots at a moment’s notice and rips off dozens of other, better movies in its short running time.

Rihanna does a fine job in the role of Tip, showing more range in her delivery than she did in her earlier Battleship. For some mind-boggling reason, though, despite the fact that Rihanna voices one of the two leads, the movie features around a half-dozen Rihanna songs on its soundtrack (not meant to be interpreted as being sung by Tip) — including one that Tip dances to and sings along with on the radio, in a scene that makes no sense when you watch it and less the more you think about it. 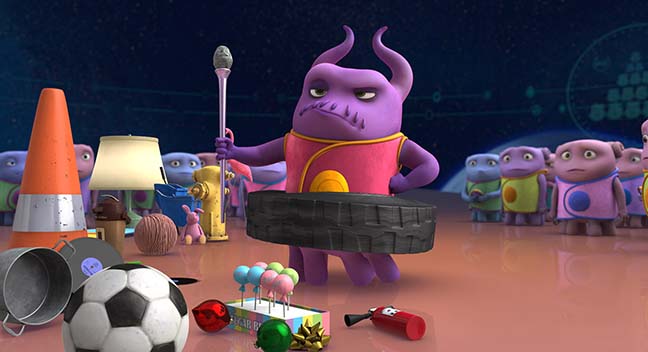 Even at their worst, DreamWorks Animation’s movies have always offered something in terms of quality, whether it’s Shrek 2’s supporting cast or Turbo’s visual flair. Home is beyond redemption. It’s unoriginal, unfunny, and unlikable. It’s there’s a silver lining at all for the animation titan, it’s merely that there’s nowhere for them to really go now but up.