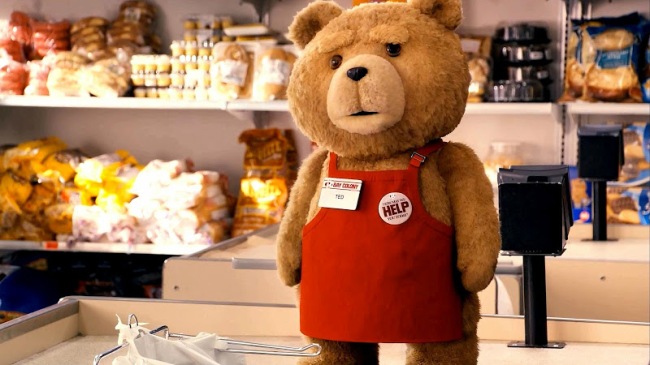 History will show Seth MacFarlane’s entire career to be most shaped by one bit from a second-season episode of Family Guy, in which Peter trips running home, scuffs his knee, and rocks back and forth, cradling it in pain, for so long that it stops being funny and then somehow becomes funny again.

The lesson MacFarlane seems to have taken away from the success of that bit is that if a joke runs out of momentum, it should eventually recover is you just keep the scene going. On Family Guy and American Dad, that has led to some of their most hysterical gags. In Ted and A Million Ways to Die in the West, it evidenced that MacFarlane’s scuffed-knee persistence can’t sustain itself over the course of a feature film. Ted 2 is the most disappointing proof of that yet.

Those judicial threads form a large part of the backbone of Ted 2, which finds Ted (voiced by MacFarlane) and his best friend John Bennett (Mark Wahlberg) fighting for Ted’s right to be acknowledged as a person by the United States Government, so he and his human wife Tami-Lynn (Jessica Barth) can adopt a child.

The trouble is that in Ted 2, it’s more obvious than ever just how scattered MacFarlane’s attention span is and how unfocussed he can be, despite the sharpness of his wit when its on target. There are some moments of pure genius, like full-scene homages to Planes, Trains & Automobiles and Jurassic Park that are shrewdly filmed. But then, there’s also a lazy cavalcade of cameos paraded through the two-hour comedy, usually for no reason but to maintain the attention of audiences bored by the same shtick. 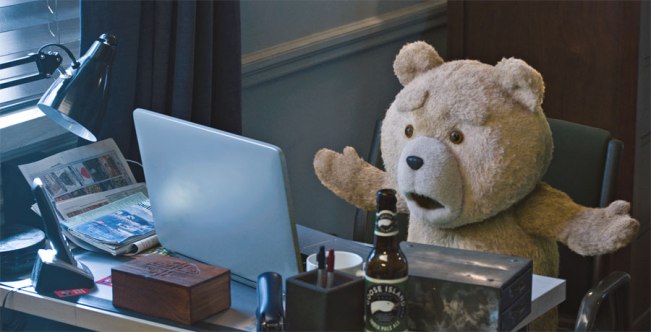 Alas, the amazingly good timing of a movie about equal rights opening the theatres the same day gay marriage is legalized in the United States is completely squandered by countless homophobic jokes polluting the script. And they’re not even an exception in quality; perhaps the worst crime Ted 2 commits is that for way too much of it, it’s just generally not very funny.

Ted 2 is one of those films where two-thirds of the movie-going public already know whether they’re seeing it or not. To the remaining third, know this: if you’ve always wished someone would make a movie that featured both a lavish, ‘50s-style opening dance numbers in tuxes and a sloppy, slapstick scene involving Wahlberg’s character being covered head-to-toe in sperm bank donations, this is the scatter-brained movie for you.

But you’ll still find it too long.