When it comes to space travel franchises, there are two major camps, depending on whether you prefer enjoyable entertainment (Star Wars) or a stimulating narrative (Star Trek). Both have value and contribute something different to the subgenre, despite their radical differences.

Much as a time traveller who repeatedly goes back in time to fix a single mistake could screw things up more and more upon each trip, though, the Terminator series has run amok, with a narrative so muddled by this point that it’s a headache to attempt to follow. Terminator: Genisys, the latest in the 31-year-old series, is of good quality, but cursed with the most preposterous and needlessly confusing plot of the entire series and an inadequate lead.

For the uninitiated, the Terminator movies envision a future where machines become self-aware and decide to kill off humans. The machines figure out time travel just as they are about to lose the war against people, so they send a killing machine back in time to kill the mother of the leader of the resistance before he’s born. The leader also sends a soldier back, to protect his mother from the terminator.

While The Terminator envisioned a desolate future beyond 1997, sequels over the last two decades have had to continually rejigger the chronology to stay current. By Terminator: Genisys, the narrative now takes place in the war-torn future. While James Cameron’s original told the story from the perspective of Sarah Connor, the woman whose son would be king, Terminator: Genisys tells the same tale from the perspective of Kyle Reese, who is sent back in time to protect Sarah.

When Kyle (Jai Courtney) arrives in 1984, though, instead of finding a helpless waitress and saving her, he finds a militant Sarah Connor (Emilia Clarke) with her own terminator bodyguard (Arnold Schwarzenegger), who saves him from a different terminator attack, before the three start time-hopping in a narrative snowball that picks up all types of character and plot elements and jumbles them together in the hopes that unpredictability will translate into an interesting story.

Instead, Terminator: Genisys is fun but brainless, exciting but a chore to follow. By the time the final act arrives (around the time the natural climax should have), it becomes easier to just go along for the ride and not worry about trying to make sense of it. After such a distinguished beginning as serious sci-fi, the Terminator movies have now become the Back to the Future movies — the difference is that at least Robert Zemeckis’ trilogy was fun. It’s very hard to achieve that same feeling when dealing with humanity’s extinction. 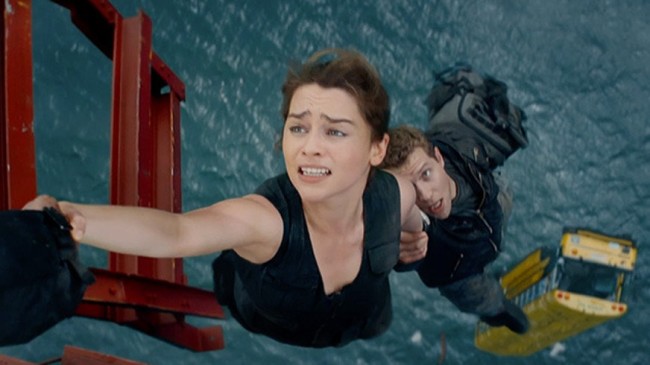 It would be wrong to not say that much of the movie is good, and likely better than hardcore fans of the series will expect. Clarke is a fantastic replacement for Linda Hamilton and Schwarzenegger slips the leather jacket on like it’s an old baseball mitt that still fits his hand perfectly. As well, some of the action scenes, while lacking the beauty of James Cameron’s cinematic eye, are genuinely gripping.

Unfortunately, Courtney just can’t hold the movie. Not only is he the complete opposite of everything Michael Biehn’s Kyle Reese was, but his face is constantly frozen in a look of concerned smoulder. He’s better here than he was in A Good Day to Die Hard and the Divergent movies, but when compared against recent action-hero performances from Chris Pratt or Tom Hardy, he just seems ill equipped to properly carry the weight of this franchise.

Perhaps the real problem is that The Terminator was cursed with what many argue is the greatest sequel of all time, Terminator 2: Judgment Day. Perhaps if James Cameron’s sequel weren’t so brilliant, so entertaining, and so spectacularly assembled, the series would have ended early, instead of dragging out into decades of inferior sequels and diminishing returns. If only there were some way to go back to 1991 and stop James Cameron…