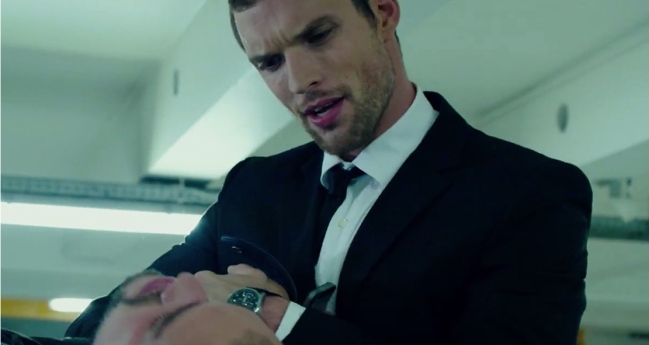 Remember The November Man? No? Fair enough; I barely do, and I reviewed it only a year ago. There are pockets of the year where movies are left to more or less die in between periods reserved for better movies, and late August/early September is one of those dumping grounds.

Going into The Transporter: Refueled, I anticipated it would fill that same quotient: another simple action movie from a foreign studio, concerned merely with being adequately entertaining for its running time and then leaving my memory no later than I left the theatre. What I was got was far from that.

The fourth entry in the action franchise originally starring Jason Statham is both a sequel and a reboot (hence the title). After Statham passed on returning, Ed Skrein has taken the wheel, and from the start it’s clear he’s a suitable replacement. And for the first scene or two, that’s enough to give you hope.

Then the plot starts to unfold.

For the uninitiated, Martin is a driver for hire who never gets emotional and always keeps his cool during his drive from Point A to Point B, living by three invariable rules: no names, never change the deal, and never open the package. Sure enough, all three rules go out the window pretty quickly.

During dinner with his retiring father (Ray Stevenson), Frank gets a call with a job offer from a mysterious woman (Loan Chabanol) who wants Frank to transport her and two packages. When the packages turn out to be another two women who get in the car with her, Frank calls off the deal, only to be forced into taking it after discovering the three women are holding Frank’s father hostage.

Once they’re delivered, Frank’s father is then poisoned by the women and Frank is forced to help them with the next part of their grand scheme, all of which is ultimately designed to destroy a crime boss/sex trader who ruined their lives. (Don’t worry, that potential plot point is spoiled in the first scene.) This blackmail continues for the course of the film, until a narrative Stockholm syndrome sets in and Frank helps them out of the kindness of his own heart.

Frank’s change of heart in the last act is just one of many in the movie, as The Transporter: Refueled can’t even keep track of its characters’ basic personalities and motivations, which can change within the span of a single scene, sometimes more than once. It’s actually quite confusing if you’re the type who leaves even a few brain cells running while watching an action movie. Taken as a whole, the entire film’s a giant mess; within standalone three-minute scenes, each barely can remain coherent.

If there’s one thing action movies produced by Luc Besson (the man behind The Transporter, District B13, Taken, Lucy, and others) are usually proficient in, it’s action scenes. Not this time around. Structurally, they should be sound — particularly one in the streets of the French Riviera and the second-act climax at an airport — but something about them never quite clicks.

While the writing is quite awful, the fault ultimately lies with director Camille Delamarre, who just doesn’t seem to have the right touch to pull off what Besson can conceive. She was a large reason why last year’s Brick Mansions didn’t succeed (a remake of Besson’s District B13 that even went so far as to cast the star of the original), and The Transporter: Refueled has the same problem. After studying under Besson’s tutelage, Delamarre knows what to do, but she doesn’t yet have the finesse to achieve it.

If there’s a redeeming factor in the movie, it’s Ed Skrein, who — as sacrilegious as it sounds to say — is better than Jason Statham as Frank. Statham’s large weakness in action movies is that he forgets to emote anything beyond seriousness. Skrein, on the other hand, folds a resignedness and a smirk into the character that makes him more likeable and relatable than he’s been before. If nothing else, the movie serves as a calling card for bigger projects for him, like last year’s RoboCop was for Joel Kinneman, because Skrein’s suited for better things than this. (We’ll see how he does as the villain in next year’s Deadpool.)

The Transporter: Refueled starts off blandly adequate and gets increasingly worse. In any other year, it would most assuredly go down as one of the 10 Worst. The fact it might not says more about how many bad movies 2015 has given us than about the quality of this junker. The only thing worse than Refueled itself is the threat that it’s the first in a new trilogy. Personally, I’m crossing my fingers for engine failure next time.