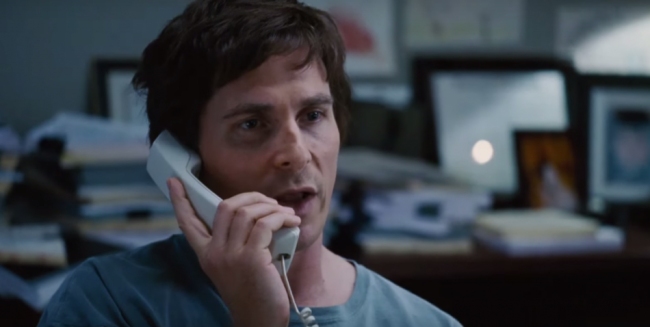 Many of the characters in The Big Short are hotshot brokers and bankers who trade in millions daily (before the financial crisis of 2008). Two, though, are younger guys who’ve never had the chance to land a big deal and just want a shot at the grown-ups table.

Adam MacKay is a talented director who’s always been held back a bit by the comedies he’s made: Step Brothers, The Other Guys, Talladega Nights: The Ballad of Ricky Bobby, and both Anchormans. He wasn’t the logical choice to direct a movie that has no shrieking, streaking, or Will Ferrell. The Big Short is his big shot.

On the surface, The Big Short seems similar to Margin Call, the Oscar-nominated Kevin Spacey drama that examining key people at one banking institution who clued into the crash the night before it happened. Narratively, though, this is a much larger beast.

Michael Burry (Christian Bale) was a hedge fund manager whose knack for numbers and differently wired brain discovered the economy was going to collapse — three years before the rest of the world. When he starts investing millions against the market, a few other powerful figures like Jared Vannett (Ryan Gosling) and Mark Baum (Steve Carell) get in on it, as well as those two plucky twenty-somethings from three paragraphs ago.

To be sure, The Big Short tells a crazy story about an even crazier situation, and one that you probably still don’t understand. The housing and credit bubble that burst and destroyed the global economy eight years ago was an incredibly complicated event, and not just due to the indecipherable jargon those who live on Wall Street use to obfuscate what they actually do.

Thankfully, the script by Charles Randolph and MacKay knows how boring and confusing its subject matter is and ingeniously finds amusing and interesting ways to explain its most complicated facets. (Why listen to dry exposition when you can have Anthony Bourdain explain CDOs using leftover fish meat or watch Margot Robbie define sub-prime mortgages while soaking in a hot tub?)

Gosling gives another of his consistently strong performances, holding his own against every co-star and commanding the screen any time he addresses the camera (which almost every character in the movie does at some point). Bale’s work here isn’t as impressive as in something like The Fighter or The Prestige, but it’s still an awesome sight to behold; Bale knows how to hold your attention with a fumbling pause better than almost any dramatic actor around.

But then there’s Steve Carell. As funny as Carell has been in things like The 40-Year-Old Virgin and The Office, and as much as he wants to make the leap that Bill Murray, Jim Carrey, and Ben Stiller made before him, that tragic truth is he’s nowhere close to where he needs to be as a dramatic actor to fit in here. His cartoonish accent and bombastic yelling lack all the nuance of the performances around him and detract from the whole whenever he’s onscreen. Everyone else’s strong work helps compensate, but Carell feels like a teenager eagerly tagging along with his adult brothers, not mature enough yet to truly fit in with them.

The biggest surprise, though, is still the impressive job McKay does. If he continues pursuing projects like this, McKay could very well have a much bigger career than just being the guy who directs Will Ferrell laughers. The Big Short is the best thing he’s made yet and his first truly great movie. He’s finally made it to the grown-ups table.