One of the most fascinating characters on the J.J. Abrams-produced series Lost was Desmond Hume, a man who had spent a 3-year portion of his life living underground in a bunker filled with ‘60s technology, hoodwinked by a man who convinced Desmond he’d saved him from a epidemic and that to leave would be to expose himself to a deadly plague. The two-hour episode that showed his whole ordeal in flashback is considered by many to be not just one of the best episodes of the show but of modern broadcast television.

The fact that J.J. Abrams wasn’t involved in the creation of 10 Cloverfield Lane (which was originally titled The Cellar, until Abrams changed the title to juxtapose it with his 2008 monster movie, Cloverfield) makes this a fascinating case of full-circle art, as the movie is, for the most part, that very same two-hour episode of Lost. But while Lost had to keep itself open to more seasons of possibilities, 10 Cloverfield Lane is free to aim for the sky and reach as high as they dare.

While the story may be familiar, the characters here change everything. As we meet Michelle (Mary Elizabeth Winstead), she’s fleeing her old life (and fiancé). The opening credits play over the startlingly sudden car accident she finds herself in. Five minutes into the movie, Michelle awakens in a concrete room, attached to an IV bag and the wall, seemingly the victim of a caregiver who watched Misery one too many times.

That caregiver is Howard (John Goodman). As the opening act unfolds, the quite-possibly-crazy, quite-definitely-unstable Howard explains to Michelle there has been a worldwide catastrophe that’s wiped out the rest of the population. The only survivors are Michelle, Howard — who built the bunker they’re in and rescued Michelle on his frantic drive home to get safely underground — and Emmet (John Gallagher, Jr.).

Emmet is a local contractor who helped Howard built the bunker back in the Y2K days and confides to Michelle that he witnessed the explosion that lit up the entire sky beyond the horizon, which made him race to Howard’s and fight his way inside just as Howard was arriving to do the same.

Michelle doesn’t believe a word of it. At first.

The setup is pretty flawless, but what keeps the thriller from becoming stale are the performances. As Michelle grapples with her situation and conceives of every possible future between escaping into a normal world and living out the half-life of a nuclear attack underground with two strangers, so much is expressed just through a movement of Winstead’s eyes. And Gallagher, Jr. makes Emmet a sympathetic, naïve fool, too quick to believe everything Howard says until Michelle begins asking him questions he never pondered.

Goodman’s acting is the one to come for, though. He gives a loudly powerful performance, commanding the screen with an authoritative anger he hasn’t tapped into since The Big Lebowski, but with none of Walter Sobchak’s dimwittedness. He makes Howard an incredibly formidable and inscrutable figure, always half a step ahead of or behind Michelle. The bulk of the movie is spent determining whether Howard is a malicious kidnapper, a conspiracy nut who’s snapped, a true saviour of Emmet and Michelle, or some combination thereof. 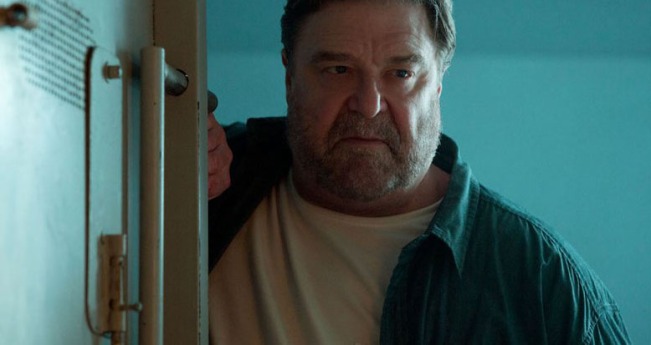 While the performances are wonderful, they disguise how disappointingly simple the characters are. Any characters’ backgrounds that are provided come about through delayed exposition — which, admittedly, is a staple of mysteries – but by asking audiences to accept and follow characters that are initially question marks, there’s a tacit understanding that a movie will eventually give you the information it’s withholding.

The large problem with 10 Cloverfield Lane is that it asks so many misdirecting questions and has so many red herrings, it can’t find enough narrative time to answer or explain them all. And in 10 Cloverfield Lane’s case, some of those red herrings — including an unseen character repeatedly talked about that is the indirect cause of numerous later turns of the plot — are so fascinating, it’s a real disappointment to not get any resolution to those parts of the story.

10 Cloverfield Lane, for the record, is not a direct sequel to Cloverfield. If you go in anticipating another kajiu movie, you’ll find yourself disappointed. It’s no more related to Cloverfield than Prometheus is to Alien or than Kevin Smith’s first five movies are to each other — which is to say, tangentially at best.

No, the movie it feels more like the true successor of a different movie from the ‘00s: M. Night Shyamalan’s Signs. Whatever your thoughts on the love-it-or-hate-it climax/ending, it’s hard to argue that the first two-thirds are a brilliantly ratcheted thriller. People’s issues with the Signs are generally dissatisfaction with where the story went once it finally took its biggest leap of faith and spilled its beans in the third act, which shouldn’t negate how good the rest was.

The same goes for 10 Cloverfield Lane. One way or another, it’s hard to not adore the skill and talent on display in front of and behind the camera in the first two acts. Once the final act arrives and you get answers to (some of) the questions that have been plaguing you all movie, your enjoyment will be dictated entirely by whether you appreciate the gutsiness of the filmmakers to see their story through to an ending that’s as daringly unexpected as what came before. Of course, if you’re already a fan of J.J. Abrams or Cloverfield, appreciation of the daringly unexpected is really an assumed pre-requisite.

One thought on “REVIEW: 10 Cloverfield Lane”