Depending on what you’re comparing it to, Popstar: Never Stop Never Stopping is either disappointing or impressive.

Its most obvious inspiration is Rob Reiner’s classic This is Spinal Tap, which practically invented the mockumentary subgenre. To those viewing Popstar as an extension of Saturday Night Live’s digital shorts (which catapulted comedy trio The Lonely Island to fame), though, fears of another It’s Pat or MacGruber are probably fresh in mind.

Popstar: Never Stop Never Stopping is no This is Spinal Tap, but it’s the freshest comedy tangentially related to SNL since Megamind.

The Lonely Island — Andy Samberg, Jorma Taccone, and Akiva Schaffer — previously directed and starred 2008’s Hot Rod, but without writing it themselves, it didn’t have the unique comedic tone of “Lazy Sunday” or “D— in a Box.” Given free reign here, the three spin a caustic parody of every modern pop entertainer from Justin Bieber to Justin Timberlake.

Conner 4 Real (Samberg) is the new prince of pop. Conner started out in the rap group Style Boyz, with Owen (Taccone) and Lawrence (Schaffer). When Conner’s solo career skyrocketed him to the height of fame normally reserved for those with sequined gloves, the group split, with Owen joining Conner’s entourage as his DJ and Lawrence moving to a farm in Montana.

Owen’s not the only person in Conner’s entourage, though. Along with his manager (Tim Meadows), publicist (Sarah Silverman), and roadie (Bill Hader), Conner employs over 30 people to keep his life comfortable, including a wolf trainer, a fall guy, and a turtlesitter.

Popstar presents itself as less of a rock documentary like Gimme Shelter or Rattle and Hum than as one of the newer promotional documentaries that serve to fakely show how “real” everyone from Justin Bieber and Katy Perry to the Jonas Brothers and One Direction are.

After his first album made him the biggest name in music, the unseen crew of Popstar follows Conner on the day of his sophomore album’s release, Connquest. Because there’s no comedy to be had in success, of course, the album receives a negative 4.0 from Pitchfork and a “s— emoji” rating from Rolling Stone.

Embarking on a world tour and desperately hoping to win back everyone’s love, Conner makes one bad PR move after another, as every piece of his phony life is humiliatingly stripped away from him on camera. It would all be incredibly sad and uncomfortable if Samberg didn’t play Conner as such a pitifully pompous loser that you feel no shame in wanting him to fail, echoing the real-life cultural schadenfreude around Justin Bieber the last few years.

In fact, part of what makes Popstar so cutting it how deftly it draws from countless real-life PR incidents in stitching together Conner’s downfall. Conner has a humiliating wardrobe malfunction on stage (a la Janet Jackson’s “nipplegate”), uploads his new album to everyone’s wi-fi enabled kitchen appliances without people’s permission (a la U2’s iTunes debacle), and defecates in the Anne Frank House’s toilet (a la Bieber’s guestbook blunder). 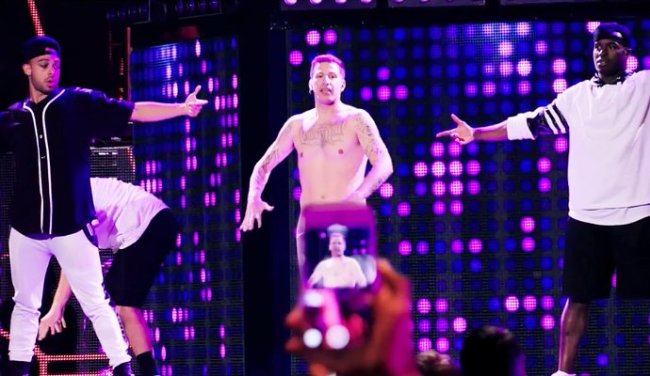 What’s more, while mockumentaries inherently parody real documentaries, Popstar is sharp enough to parody mockumentaries themselves. Everything from Best in Show to Borat follows a similar narrative structure, which Popstar knowingly ridicules by sublime extremes. The movie’s third act would seem trite and unoriginal, were it not making fun of the very movies that make fun of trite and unoriginal third acts.

The big problem with Popstar: Never Stop Never Stopping is that it’s trapped between two flaws and can only realistically avoid one. Comedies like this work best with short running times, so the comedy can burst in, do its thing, and make its exit before the laughs get old.

At 86 minutes, Popstar smartly doesn’t outstay its welcome, but with a sprawling cast of comedy stars populating less than an hour and a half of film, everyone outside the core trio gets short-changed. Hader, Timberlake, Maya Rudolph, Will Arnett, Will Forte, and a bevy of other funny faces get about three minutes apiece, just because any longer would result in a longer (and thus, less funny) movie.

It’s a tough situation to be in, and the catch-22 ultimately makes the movie suffer — though that, in itself, is almost a compliment of sorts to how funny every comedian is with their role. Hader, in particular, is hysterical as a roadie whose favourite pastime is flatlining (inspired by Flatliners, “the Joel Schumacher film shot by Jan de Bont”).

Popstar: Never Stop Never Stopping may not quite be the next This is Spinal Tap — “I used over 100 producers for 17 tracks, to guarantee they’re all hits” doesn’t have the same cache as “These go to 11” — but it’s one of the smartest mockumentaries to come around since A Mighty Wind and one of the funniest movies you’ll see nowadays with this many SNL alumni.