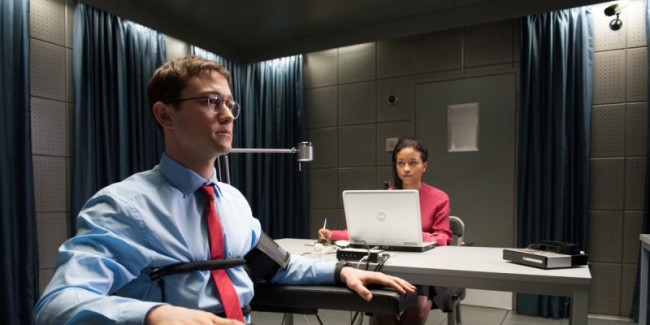 A year ago, Joseph Gordon-Levitt starred in The Walk. Adapted from the same you-wouldn’t-believe-it-if-it-weren’t-true tale as 2008’s Oscar-winning documentary Man on Wire, The Walk was a biopic of tightrope-walker Philippe Petit that fictionalized the events that’d been shown in documentary footage less than a decade earlier.

What saved it from feeling like an unnecessary re-tread — besides Gordon-Levitt’s strong performance — was the skill of legendary director Robert Zemeckis, who made the crazy true story feel even more real than the documentary footage.

Now here we are one year later, with Joseph Gordon-Levitt starring in Snowden, adapted from the you-wouldn’t-believe-it-if-it-weren’t-true tale as 2014’s Oscar-winning documentary Citizenfour. Once again, Gordon-Levitt’s performance gives the movie a strong anchor. Director Oliver Stone, though, can’t pull off the same daring feat as Zemeckis.

Framing itself as large chunks of flashbacks told while holed away in the Hong Kong hotel room in which all of Citizenfour took place, the titular Edward Snowden (Gordon-Levitt) spends the movie giving his story to documentarian Laura Poitras (Melissa Leo) and Guardian journalists Glenn Greenwald (Zachary Quinto) and Ewan MacAskill (Tom Wilkinson).

From his Steve Rogers-y beginning as a scrawny soldier unable, to physically endure through his years as a prodigy at the NSA and the CIA, ultimately to his whistleblowing on the covert surveillance programs the NSA was running on the global population without their notice, Stone refrains from romanticizing or glorifying Snowden’s actions. Instead, he lets Gordon-Levitt’s charm win us over. 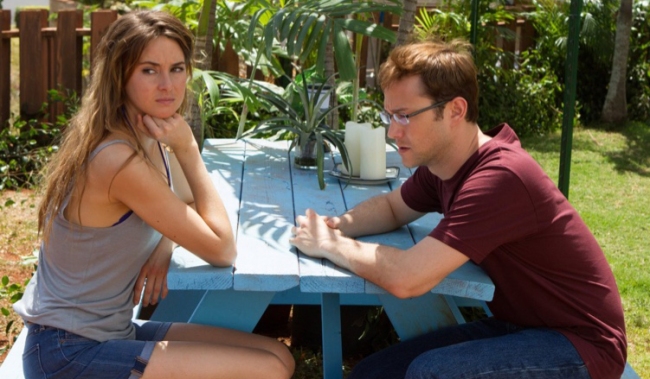 Talented actors and recognizable faces as varied as Shailene Woodley, Joely Richardson, Rhys Ifans, Nicolas Cage, Timothy Olyphant, and Scott Eastwood fill the roles of those either threatening him or being threatened because of Snowden. Ifans is especially memorable as Snowden’s paternal boss Corbin O’Brian, the only man who intimidated Edward and the only one consistently aware of just how dangerous Snowden could be.

A large fault of Snowden’s script is that it can’t appease either of its audiences. If all you know about Edward Snowden is that he sounds like a Game of Thrones character, Stone’s movie will likely bore you for spans of the overly long second act. If you know more than the average moviegoer (having already seen the events of Snowden being captured on film for real in Citizenfour, for example), you’ll likely just appreciate the power of the characterizations by the actors.

Gordon-Levitt gives yet another brilliant performance, keeping him up alongside the ranks of actors like Jake Gyllenhaal or Oscar Isaac, giving award-worthy performances that continually don’t get the acknowledgement they warrant. Between his work in The Walk and now Snowden, it’s hard to imagine the child-actor-made-good not winning an Oscar within the next decade.

Snowden’s story is a truly amazing one, and deserving of the film treatment. If it hadn’t already gotten the perfect one just two years ago, it would certainly feel fresher and more thrilling than it does — though that’s not to detract from how effective a thriller it becomes once it really starts picking up speed.

Oliver Stone is more restrained here than he’s been since Wall Street: Money Never Sleeps, which really helps the cast rise above the script’s bloated middle act. At the end of the day, Snowden is no The Walk. That movie used the power of cinema to elevate an already unbelievable experience. Stone’s Snowden, though, as great as it sometimes is, can’t quite reach the incredible heights of its documentary counterpart.