Every few years, a literary thriller takes the world by storm, before then inevitably being turned into a movie.

Paula Hawkins’ The Girl on the Train, the latest of such runaway bestsellers, owed more than a bit of gratitude to Gone Girl, Gillian Flynn’s massive book from a few years ago.

The movie adaptation of Gone Girl was comprised of many brilliant facets but marred by a poorly conceived and written third act.

Tate Taylor’s adaptation of The Girl on the Train wants to be the next Gone Girl even more desperately than the book did, but flips the ratio of problems: it’s comprised of many dumb factors but almost saved by possibly the best performance of 2016. 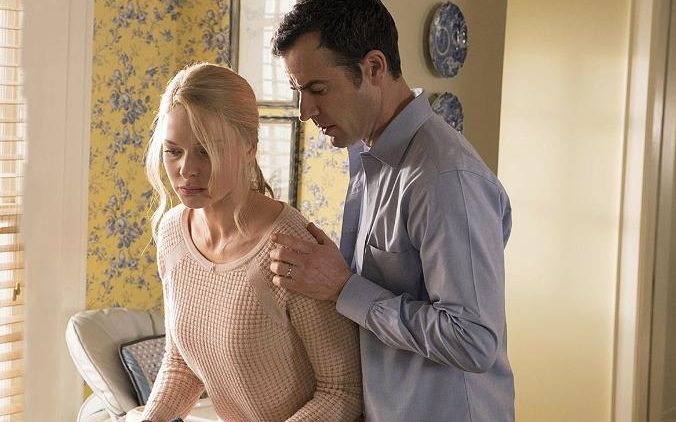 Rachel (Emily Blunt) is a woman barely existing. After she and her husband Tom (Justin Theroux) had repeated fertility problems, she turned to alcohol to cope, which slowly shattered her marriage, her work, and her personal life.

Now divorced and unemployed, she rides the train into New York every morning, nursing vodka out of a water bottle and staring bitterly from the train as it passes her ex-husband’s house every morning, which he now shares with his new wife Anna (Mission: Impossible – Rogue Nation‘s Rebecca Ferguson) and the baby they’ve had together.

Rachel also becomes obsessed with a young woman living two houses down the street from them, Megan (Haley Bennett), who has the idyllic romance she wishes she still had.

Each morning, she spots Megan and husband Scott (Luke Evans) on their balcony, envying them through her inebriated stupor.

Then one morning, from her seat on the train, she sees Megan making out with another man.

Furious at Megan for destroying the proxy romance through which Rachel was barely coping, she drunkenly stumbles off the train to confront her.

Spotting Megan jogging into a tunnel, Rachel stumbles after her in a fury. The next thing she knows, she’s waking up from being blackout drunk, she’s caked in blood, and Megan is missing.

The bulk of the plot centers on Rachel trying to solve the disappearance of Megan and piece together what happened that night, to absolve her guilt and also clear her name as a suspect.

Like with Ben Affleck’s Nick Dunne in Gone Girl, the movie is built around guessing whether Rachel is responsible and what the complete truth of the situation is.

Also like Gone Girl, the script relies on an unreliable narrator out of laziness rather than out of clever storytelling. The ultimate truth is believable, but the movie feels like its cheats you to get there, outright lying about things just to retell them in the final act.

The script is adequate for the first two acts, before giving in to over-the-top turns of plot that betray both the characters and the audience.

With the exception of a wonderfully three-dimensional cop played by Allison Janney, the supporting roles don’t feel real, but rather feel like plot elements only fleshed out for specific purposes scene-to-scene.

The saving grace of the movie — and, man alive, what a grace it is — is Blunt’s blisteringly devastating performance as Rachel.

Blunt studied addicts and alcoholics extensively before filming and her preparation pays off brilliantly, with one of the greatest performances any actor has given of an alcoholic since the days of Richard Burton and Humphrey Bogart.

Between her work in last year’s Sicario — for which Blunt deserved to win the Best Actress Oscar — and The Girl on the Train, it seems she’s destined to win an Academy Award very soon. If she doesn’t this year, it will be due to the very crowded field in 2016 and the fact the rest of The Girl on the Train stands in a stark difference of quality to her work within it.

Director Tate Taylor wants to direct The Girl on the Train like a David Fincher movie, but it’s a wasted pursuit. Even if the script were better, his work on The Help and Get on Up prepared him little for dealing with the inherent darkness and demons lurking beneath the surface of the content The Girl on the Train swims in.

Fincher, of course, directed the 2014 adaptation of Gone Girl (as well as the adaptation of that book’s tonal predecessor, The Girl with the Dragon Tattoo).