Since the Academy of Motion Picture Arts & Sciences expanded their Best Picture category to up-to-10 nominees, there’ve been even more movies to catch up on than there used to be. On top of that, sometimes life just gets in the way of seeing them all.

In point of fact, life actually prevented me from seeing most of the major Oscar nominees up until just this past weekend. In a giant, two-day marathon, though, I binged a dozen of them. Fresh off that blitz, here’s what you need to know about each of them before the ceremony tonight.

Writer-director Mike Mills, whose vibrantly alive Beginners was one of the best movies of 2011, toggles from looking at the impact of his father to that of his mother in the unofficial companion piece 20th Century Women. Annette Bening gives one of the strongest performances of an underappreciated career as Dorothea, who enlists the aid of a feminist boarder (Greta Gerwig) and her son’s crush (Elle Fanning) to help raise her teenaged son (Lucas Jade Zumann) in the late ’70s. (4½ stars)

Polarizing in all the best ways of something like 2001: A Space Odyssey, Arrival is not for everyone. It doesn’t pander to those who don’t want to give in to the movie’s frequency. If you’re willing to let Arrival connect with you on its own terms, though, it’s an experience befitting of the one of the best movies of 2016, featuring one of its best performances in Amy Adams as the linguistics professor chosen to communicate with aliens upon first contact. (5 stars)

Washington and Davis reprise their Tony-winning performances in an adaptation of the August Wilson play brought to the screen by Washington himself. What is already heavy and challenging material on the stage ultimately bogs down the stagnant movie too much for its own good, but the justly nominated performances of the two leads showcase two strong actors at their peaks. (3½ stars)

A decade after his last directorial effort, Mel Gibson returned behind the camera with this war picture focussed on Desmond Doss, a conscientious objector who fought in WWII and won the Medal of Honor without touching a weapon. Some of the characters are overly simplistic and the plot’s pretty rote, but Gibson’s directing elevates the average material. (4 stars)

A modern-day Bonnie and Clyde, Hell or High Water follows two brothers (Chris Pine and Ben Foster) whose ranch is about to be foreclosed upon by a bank and who decide to start robbing the very banks they’ll be paying. Bridges is receiving the acting attention for a performance no different than his work in True Grit and R.I.P.D., but Pine and Foster more than hold their own with challenging material from the writer of last year’s Sicario. (4½ stars)

The true story of three black, female mathematicians (Spencer, Taraji P. Henson, and Janelle Monae) working for NASA in the 1960s, Hidden Figures walks a confident balance between being a crowd-pleasing fell-good picture and a well-made period piece depicting unsung heroes. Kevin Costner and Mahershala Ali also given strong work in supporting roles to a story that throws a lot of softballs to itself but hits a lot of homers just the same. (4 stars)

A montage of disconnected scenes taking place after, before, and during JFK’s assassination, Pablo Larrain’s biography of the First Lady of Camelot may have intended itself to explore a complicated woman, but comes off as little more than a showcase for Portman’s acting ability. That said, her performance is one of the strongest, most stunning of the year. (3 stars) 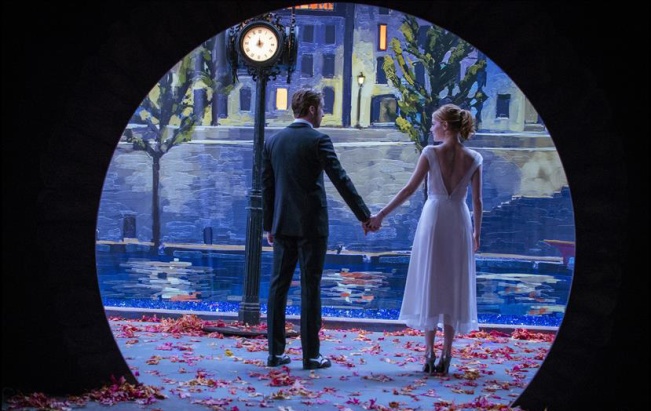 A love letter not just to the classic movie musicals of the ’50s and ’60s but also to sweeping romances and the glitzy mythology of Hollywood, La La Land has been the buzzed-about movie of 2016 since first storming TIFF in September. In a rare instance of hype being on the mark, everything you’ve heard about the Best Picture frontrunner is true. Stone, in particular, gives the greatest performance so far of her still-young career. (5 stars)

An ensemble of previously-nominated actors leads this prestige picture that never fully shakes the idea it exists purely to be nominated for more Oscars. Patel and Kidman give strong performances, as does Priyanka Bose as the biological mother Patel’s displaced Saroo spends the latter half of Lion searching for, but the ending is overly manipulative in its emotional heartstring-yanking. (3½ stars)

A perverted love child of Orwell and Kafka, The Lobster defies categorization even more than it defies description. In an alternate world where newly single people are given 45 days to find a new mate or else be transformed into an animal, David (Colin Farrell) goes on a journey of absurd desperation in a twisted comedy that has twice the brains of a typical movie but uses all of its best ideas in its first half. (4 stars)

After the apocalyptic Take Shelter, the rural Mud, and the supernatural Midnight Special, writer-director Jeff Nichols shifts genres once again to tackle the fight of Richard and Mildred Loving (Joel Edgerton and Negga), the couple directly responsible for the Supreme Court ruling on the constitutional legality of interracial marriage. Negga is wonderful as the patient Mildred, as is Edgerton as the gruff Richard, but the movie starts to run out of steam partway toward its powerful climax. (4 stars)

MANCHESTER BY THE SEA

With an unflinching stare of despair and pain, Manchester by the Sea is a gruelling movie, but it’s also a great one. The sad life of Lee (Affleck), an alcoholic janitor whose existence seems surrounded by death, is a mystery that becomes all the more devastating as new layers expose his tragic backstory. That said, it’s so emotionally exhausting an experience that a second viewing may be too much to take. (4½ stars)

The dark horse for Best Picture behind the exuberant La La Land and the depressing Manchester by the Sea, Moonlight shows what a lack of budget and a surplus of vision can do. Visiting Chiron at three stages of his life, writer-director Barry Jenkins creates a powerful tale of the way childhood impacts shape who we become, while giving a strong voice to an experience of growing up a gay black male. (4 stars)

An art dealer in an unhappy marriage (Amy Adams) is mailed a manuscript from her ex-husband (Jake Gyllenhaal). Most of the movie is the storyline of the vengeance-driven manuscript itself, as read by Adams’ Susan. The problem is that the manuscript’s revenge tale of a husband (also played by Gyllenhaal) and a dying cop (Michael Shannon) is far more interesting than Nocturnal Animals‘ framing device of Susan, which only serves to distract and sabotage the film. (3½ stars)

Director Ashgar Farhadi helmed the best movie of 2011, A Separation, as well as The Past, one of the best movies of 2013. His third film is yet another brilliant and devastating look at good people pushed to their limits and the tragic domino effects of honest mistakes. Farhadi is one of the greatest filmmakers working today and The Salesman is proof once more that not all of the most powerful and timeless films are made in English. (4½ stars)

As for which of these you can expect to be crowned winners tonight, check back at The Apple Box later today for my official Oscar predictions.