I don’t tend to get excited for movies. (You see enough Transformers or Madea vehicles and it’s easier to just let yourself be pleasantly surprised by the gems.) And, sacrilegious as it is to say, I’ve always felt Blade Runner was an overrated movie. Incredibly innovative and paradigm-shifting to sci-fi, don’t get me wrong; but not a perfect film from a narrative point of view.

Yet Blade Runner 2049 has been my most anticipated movie in the back half of 2017. Part of it was the brilliance of the first trailer, part of it was seeing the world Philip K. Dick and Ridley Scott envisioned with modern CGI, but the crux of it was director Denis Villeneuve.

Villeneuve has made three movies. He debuted in 2013 with the fantastic Prisoners, followed it up with the even more intense Sicario, and topped it all off with last year’s Best Picture-nominated Arrival. All three masterpieces, and each better than the one prior. It set the expectations for his fourth, Blade Runner 2049, so high for me the movie couldn’t meet them. But it comes close.

Released in 1982, Blade Runner envisioned a futuristic 2019 in which human-looking androids called “replicants,” used as slave labour off-Earth, sometimes returned to smoggy Los Angeles, where after they were hunted down by “blade runners.” The Schrödinger’s cat of the situation is that it’s been up for debate for 35 years whether protagonist Rick Deckard (Harrison Ford) was himself actually a replicant, hunting down his own kind.

Blade Runner 2049, naturally, takes place 30 years later. Nobody’s heard from Deckard in decades. The new series of replicants have been designed to function in society in subservient roles. K (Ryan Gosling) is one such replicant, working for the LAPD hunting down previous generations of replicants and “retiring” them.

Off world, K finds a coffin containing the remains of a replicant that died in childbirth — something no replicant is supposed to be capable of. His superior, Lt. Joshi (Robin Wright) orders him to cover it up, believing public knowledge would lead to a war between humans and replicants. She also orders him to hunt down the child born to the skeletal replicant and kill it.

K’s mission takes him from the home he shares with his holographic girlfriend, Joi (Ana de Armas) to the headquarters of Wallace Corporations CEO Niander Wallace (Jared Leto) to the orange-tinged ruins of Las Vegas and the secluded Deckard (the returning Ford, partway through the farewell tour of his greatest hit characters, following 2015’s The Force Awakens and before 2020’s fifth Indiana Jones movie).

The biggest danger with returning to the world of Blade Runner is the risk of tainting the memory of the original. For every Prometheus, there’s a Phantom Menace, a Blues Brothers 2000, and a Godfather, Part III. Thankfully, Ridley Scott has returned to executive produce the sequel. Moreover, Villeneuve knows exactly what he’s doing.

Some of the most memorable sci-fi movies are so packed with imaginative ideas about our future that some ideas don’t even get paid attention to, like in Minority Report — appropriately, another Philip K. Dick adaptation. Blade Runner 2049, like its predecessor, is stuffed with such inventive thinking. It walks the perfect line of seeming plausibly conceivable, considering it’s a future based on a timeline where we’re apparently travelling in flying cars by two years’ time.

Villeneuve has always has a wonderful eye for camerawork, aided by the virtuoso cinematographer Roger Deakins on Prisoners, Sicario, and now Blade Runner 2049. They paint with visual dreams here, crafting images that will sear into your brain. Unquestionably, it’s the most visually stunning picture since Kubo and the Two Strings.

For all the brilliant films Gosling has starred in, his performances tend to depend on collaborating with talented writers and directors who can sculpt him as they need. (See: Half-Nelson, Fracture, Blue Valentine, Drive, The Ides of March, The Place Beyond the Pines, The Big Short, The Nice Guys, and La La Land.) In the hands of Villeneuve, he’s just marvellous. Robotic, sardonic, inscrutable, and heartbreaking.

The supporting cast is even more impressive than the first film’s. Ford returns as Deckard (but the less said about his return the better), as does Edward James Olmos as a fellow officer from Blade Runner. In addition to Wright, Leto, and Armas, Sylvia Hoeks, Mackenzie Davis, Barkhad Abdi, and Dave Bautista all do great work with limited screen time. Armas in particular walks away with the film; expect big things from her soon. 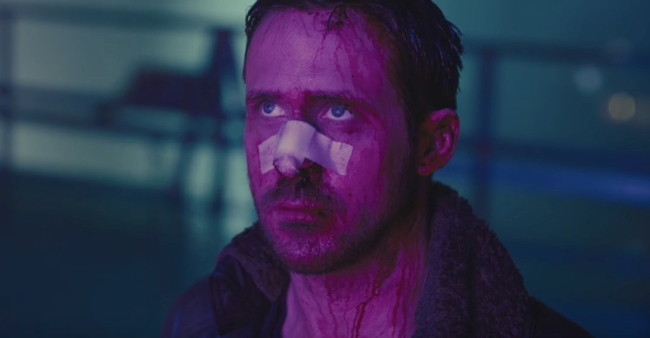 Does Blade Runner 2049‘s existence dull the significance of the seminal Blade Runner? Truly, no more so than Prometheus had any impact on people’s feelings toward Alien. All four movies are brilliant. In 2049′s case, the argument can be strongly made that in some areas — CGI-enhanced effects, Villeneuve and Deakins’ visuals, just not being so damned dark in every single scene — the sequel actually improves on the original.

I can honestly say it wasn’t as revelatory as I’d hoped on some level it would be. The fact there was a steady improvement in genius between Prisoners and Sicario and Arrival was never any guarantee that Blade Runner 2049 would be the new champion. And ultimately, it’s not better than Arrival or Sicario. Perhaps not even Prisoners.

But that’s not the right barometer to use. The proper scale is against Independence Day: Resurgence and Wall Street: Money Never Sleeps and Indiana Jones and the Kingdom of the Crystal Skull. “Too late” sequels to brilliant originals that just couldn’t live up. In those terms, Blade Runner 2049 isn’t just one of the best sequels of the last decade, it’s all-around one of the best movies of the year.