There’s something about ’90s comedies that, when watched now, seems kind of… quaint. All the demographic-courting PG-13 fare like Wayne’s World, Dumb & Dumber, and Tommy Boy — even more boundary-pushing, R-rated comedies like Clerks. or There’s Something About Mary — still lacks a little of the subversion, intellect, or bravado of the comedies of the new millennium.

Between the influences of Christopher Guest, Judd Apatow, The State, Seth Rogen, and Wes Anderson, comedy has taken on crazy new dimensions since Y2K, especially in the post-post-meta years, when styles of neo-comedy have started blending together and overlapping.

Put simply, for the sake of the list, a movie’s 5-star rating was taken as my primary consideration, with half-star bonuses added for A) pop culture saturation upon release and B) lasting comedic influence.

I didn’t include 2017 comedies in consideration, for the sake of properly judging the impact of each movie. There have been many great comedies over the last 17 years. These are just the 50 best of them. But first…

IDIOCRACY — Yes, it somewhat predicted how dumb our culture would get. But people don’t remember how much of Idiocracy itself was just as dumb.

STEP-BROTHERS — A number of scenes are fantastic, and Adam Scott steals the spotlight, but what could feel like a movie comes off more like a clip show.

TED — There’s something to be said both about acting opposite a CGI teddy bear and the embracing of Mark Wahlberg as a comic actor, but that’s all Ted really says.

Mean Girls may not have reinvented the teen comedy sub-genre, but it used Tina Fey’s sharp tongue and realistic ear for high school dialogue to reshape a rather typical new-kid-in-school movie into a comedy of such enduring popularity it’s becoming a Broadway musical in 2018.

After helping jumpstart alternative comedy in the ’70s and ’80s, Tomlin burned low through the ’90s and ’00 (with the notable exception of #48 on this list), before emerging out of nowhere with the greatest performance of her career in Grandma (and missing out on an Oscar nomination she richly deserved).

Before David O. Russell shifted into his trophy-courting period of The Fighter, Silver Linings Playbook, and American Hustle, he crafted this head-trip of a philosophical comedy about finding peace in our rushed, modern world. (Bonus points for being the first movie to show Wahlberg’s unexpected comedic chops.) 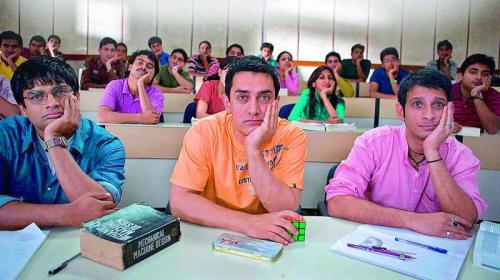 You wouldn’t necessarily expect a nearly three-hour-long Bollywood quasi-musical about engineering students to be a laugh riot, but 3 Idiots is a pure delight from start to finish. It’s not for nothing that it went on to become the highest-grossing film in Indian history.

Tapping into ’90s nostalgia a year before the rest of the world, Aubrey Plaza deftly sheds any trace of April Ludgate in The To-Do List as an eager-beaver high school valedictorian faced with the prospect of entering college ignorant of everything sex-related. Naturally, she does the smartest thing she can think of: makes a checklist of everything to try before the end of summer to become a sexpert.

Hugh Grant had become a parody of his stuttering fop roles by the turn of the century. Bridget Jones’s Diary reshaped him into something fresh, but About a Boy‘s cad Will Freeman became the role Grant was born to play. Those who only know Nicholas Hoult from such fare as X-Men and Mad Max: Fury Road will barely recognize him as Grant’s scene-stealing co-star.

Most Will Ferrell comedies can be boiled down to “Will Ferrell plays a/an <insert profession here>.” (See: Blades of Glory, Talladega Nights: The Ballad of Ricky Bobby, Semi-Pro, Anchorman: The Legend of Ron Burgundy, and Kicking & Screaming.) Much like Punch-Drunk Love for Adam Sandler, Elf was less interested in changing the Ferrell formula than in giving a good enough narrative reason to explain the comedian’s man-child behaviour. It doesn’t hurt becoming a holiday classic in the making, either.

Following up Being John Malkovich was so pressuring for screenwriter Charlie Kaufman, who was hired to adapt Susan Orlean’s The Orchid Thief into a film, he wrote himself into his own screenplay — along with a twin brother he doesn’t have.  Adaptation. is the movie made from that script, with Nicolas Cage brilliantly playing both Kaufman brothers. Additional performances from Meryl Streep as Orlean and  Chris Cooper in the role that finally won him an Oscar, Adaptation. ended up trumping even Being John Malkovich.

Sometimes, a comedy’s premise is so rich and so solid, all the makers have to do to have a success on their hands is to just not screw up. (See #32.) Neighbors takes a seemingly familiar war — that of the young frat against a group of too-old-to-have-fun adults — to hilarious heights, finding a perfect match in Seth Rogen and Zac Efron. An above-average supporting cast including Dave Franco and Ike Barinholtz is icing on the cake.

While not quite as forward-sounding today (in premise or dialect) as it was a decade ago, Juno remains one of the boldest comedies this side of the ’90s. Diablo Cody’s dialogue constructs one the quotable movies of the late ’00s and Ellen Page’s Oscar-nominated performance captures the moment a promising young actress became a force to reckon with.

ON THE NEXT PAGE: Bad Words, Big Trouble, and White Castle…