Once The 40-Year-Old Virgin firmly established Judd Apatow as not just a director but a comedy factory, his follow-up Knocked Up was expected to be the successor to his first film’s deft blend of off-the-cuff comedy and honest truths. Instead, a labour of love by Seth Rogen and childhood friend Evan Goldberg, made under Apatow’s umbrella, became his next modern classic, launching the movie careers of Oscar-nominee Jonah Hill, Oscar-winner Emma Stone, and Teen Choice Award-nominee Michael Cera in the process. Rogen and Goldberg write with a teenage verisimilitude rarely done so well since John Hughes was defining the concept.

Ben Stiller seems like an actor ashamed of what he does to pay the bills. That seems the likeliest reason he alternates brainless fare like Along Came Polly and Zoolander 2 with art-house indies like Greenberg and The Royal Tenenbaums. Yet Tropic Thunder, definitely more the former than the latter, is blessed with one of those foolproof ideas for a comedy. The cast of a war movie — including a faded movie star (Stiller), a recovering drug addict (Jack Black), and a white method actor who’s dyed his skin black for realism (an Oscar-nominated Robert Downey, Jr.) — is dropped into the jungle without a script, for the realism’s sake. When the movie’s director gets blown up, the actors take over and continue the plot, assuming they’re still actually being filmed. It’s stupid and it’s genius: perfect Ben Stiller territory.

The most mature and cinematically proficient movie Wes Anderson has yet made, The Grand Budapest Hotel feels like the thesis statement for Anderson’s career up until 2014. Combining all the best parts from his previous movies (including another two still to come on this list), The Grand Budapest Hotel uses it’s two-dozen-large cast of famous faces to tell the tale within a tale within a tale of Gustave H. (Ralph Fiennes), concierge of the prestigious Grand Budapest Hotel in 1932. When a wealthy heiress (Tilda Swinton) dies and bequeaths Gustave a priceless painting, he becomes embroiled in a caper of bitter relatives, suspicious officers, ruthless criminals, colour-coordinated secret societies, and a faithful lobby boy. Not for nothing can it be said that Fiennes gives his greatest performance here. 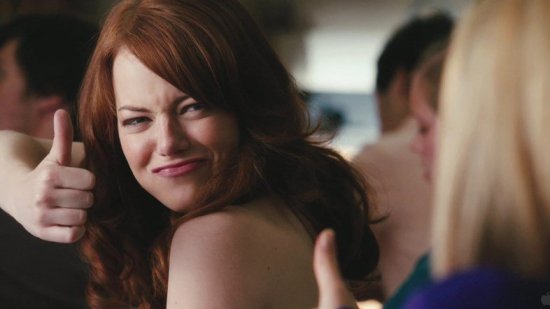 Dozens upon dozens of movies since the ’80s have tried to capture that intangible “John Hughes feel.” Even Hughes himself struggled finding it after a while. If any one movie since the early ’80s somehow just got it, it was Easy A. Emma Stone was already a star on the rise after Superbad, The House Bunny, and Zombieland, but Easy A gave Stone her first truly great role and she moulds the movie around her effervescence. When Olive (Stone) starts lying for her friends about having slept with them to help their social stature, she soon finds herself sliding down a slippery slope slope of sexual fibs and shattered lives. The fantastic script from debut screenwriter Bert V. Royal and the light touch of director Will Gluck, together with Stone, all find the perfect wavelength to create the greatest teen movie of the last decade.

So many family movies nowadays either pander to children with insulting antics or are too busy being kinetic and colourful to attempt to be clever or funny, but The LEGO Movie has an effortless power behind it. The comedy is legitimately funny, the animation is simple yet detailed, and the action careens from one random moment of creative genius to the next. It’s the type of movie that a kid could come up with, but in treating their whimsy with thoughtfulness, writers-directors Phil Lord and Christopher Miller (in their first of two movies on this list) also make you feel like a kid again. (Bonus points for being the first mainstream movie to position Chris Pratt as a leading man, setting the stage for Guardians of the Galaxy and Jurassic World.)

Michael Cera is fantastic on Arrested Development. He was excellent in Juno. He was awesome in Nick & Norah’s Infinite Playlist. He was hysterical in Superbad. But there is one role Michael Cera was born to play: Scott Pilgrim. The character and the actor are sublimely inseparable in an anomaly of a movie only someone like Edgar Wright could conjure: a proudly Canadian video-game fairy-tale romance. When the aimless Scott meets and falls for the mysterious Ramona Flowers (Mary Elizabeth Winstead), he discovers that in order to win her hand romantically, he has to defeat her seven exes, in what amounts to the only successful video game movie there’s been, through the loophole of not being a video game adaptation. By breaking the rules of cinema in a way most films outside Quentin Tarantino wouldn’t dare, not to mention thanks to Cera’s pitch-perfect performance, Scott Pilgrim vs. the World gets a high score few comedies come close to.

Best in Show hasn’t aged very well. But like Some Like it Hot, Blazing Saddles, and Monty Python and the Holy Grail, the weakened parts are made up for by how innovative the film is overall. Best in Show is that kind of movie. Writer-director-comedian Christopher Guest had tackled the “mockumentary” format once before, with 1995’s Waiting for Guffman (and This is Spinal Tap before that), but Guest’s examination of nine dog owners as they’re followed in the days leading up to the Mayflower Kennel Club Dog Show is when he worked all the kinks out. Everything from The Office to Pitch Perfect owes a favour to Best in Show. (Bonus points for essentially doing for the mockumentary subgenre what The Naked Gun did for parodies: it may not be the first, but it’s arguably the best.)

Aardman Animations, who had previously conquered the big screen with the Great Escape parody Chicken Run, made their name on the short film adventures of Wallace and Gromit. After three fantastically clever shorts, the pair tackled feature-length in one of the greatest British movies of the last few decades, along with one of the funniest. Wallace (Peter Sallis) and his often-more-intelligent dog Gromit are inventors who have now started a pest control service, AntiPesto — the first of dozens upon dozens of puns, gags, and double entendres in Wallace and Gromit in The Curse of the Were-Rabbit. The number of jokes the movie generates — as well as the exceptional number of the ones that land perfectly — rivals those of classics like Airplane! and Duck Soup. 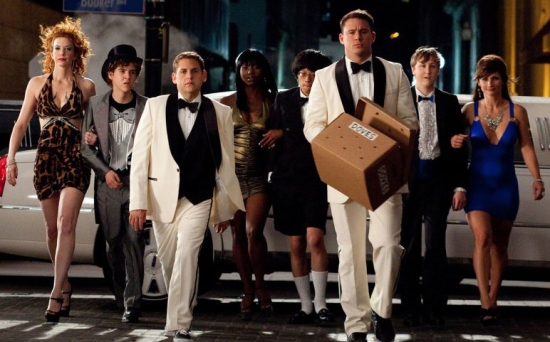 It’s amazing what you can achieve when people are too busy dismissing you to notice. The very idea of a 21 Jump Street movie sounds stupid, particularly for our more media-savvy generation, with a premise that barely held water in the ’80s. And writer-directors Phil Lord and Christopher Miller fully circumvent that stupidity by being upfront and direct about it from the very beginning — while still then holding themselves to those very concept limits. It’s a move that miraculously lets 21 Jump Street have its cake and eat it, too. The comedy’s also greatly helped by a sharp script, a strong supporting cast, and funny performances from Jonah Hill and Channing Tatum, as the two police officers undercover as high school students, and Ice Cube, as their easily exasperated captain.

After the revolutionary Rushmore, writer-director Wes Anderson was free to try anything he wanted. He’d discovered a style all his own, which felt almost like narrated bedtime stories for adults, shot with an Kubrickian eye for symmetry and posed positions, written with the cadence of a less political Aaron Sorkin. He used those skills, now honed, to tell the tale of the Tenenbaum family. When patriarch Royal Tenenbaum (Gene Hackman) returns to the family that no longer speaks to him to tell them he’s dying, they begrudgingly allow him back into their lives. With a cast also including Alec Baldwin, Danny Glover, Angelica Huston, Bill Murray, Gwyneth Paltrow, Ben Stiller, Luke Wilson, and Owen Wilson, Anderson tells an even more complex tale the second (or third, technically) time around. If Rushmore is his Reservoir Dogs, The Royal Tenenbaums is his Pulp Fiction.