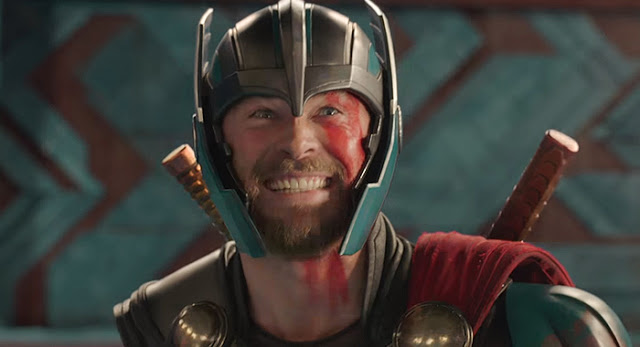 Time after time, I’ve said that Marvel Studios is the new Pixar. It’s not for nothing that right around the time Pixar’s winning streak began faltering, the Marvel Cinematic Universe came into existence. For 16 movies now, Marvel has consistently delivered great movies. How great? Eight of those sixteen got 4-star ratings from yours truly, with another four getting 4½ stars.

Just four movies have been less than great. Captain America: The First Avenger is the Moonraker of the MCU and thus best not mentioned further. And Iron Man 3 was a little too scattershot to really deliver on every front. That just leaves Guardians of the Galaxy, Vol. 2 and Spider-Man: Homecoming — the two most recent Marvel movies and the first case of back-to-back 3½-star entries in the MCU.

It all comes down to Thor: Ragnarok. Was this recent slip in quality just a blip, a sloppy Ratatouille before the invigorating WALL-E? Or would Marvel go full Pixar, with each continuing entry now feeling like the desperate exhumation of better days?

Ragnarok isn’t the saving grace for the MCU. It’s not their best movie in years, or even necessarily one of the better ones overall. But it’s one of the most refreshing, revitalizing movies to come out of the superhero factory and very arguably the most fun movie of 2017.

When last we saw Thor (Chris Hemsworth) in The Avengers: Age of Ultron, he was flying off in search of more infinity stones. That search led to him being imprisoned by a fire demon, where we catch up to him. From the first lines of comically self-aware voiceover delivered by Hemsworth, it’s clear the third Thor movie has no intention of phoning in a flavourless experience.

Thor: Ragnarok is remarkably funny. Distinctly so. It’s not a stretch at all to say that Ragnarok is Marvel’s first comedy, a funny movie with some action more than an action movie with some laughs. In lesser hands, the movie would suffer for that, but the winking script always plays things so loose you can’t help but laugh. 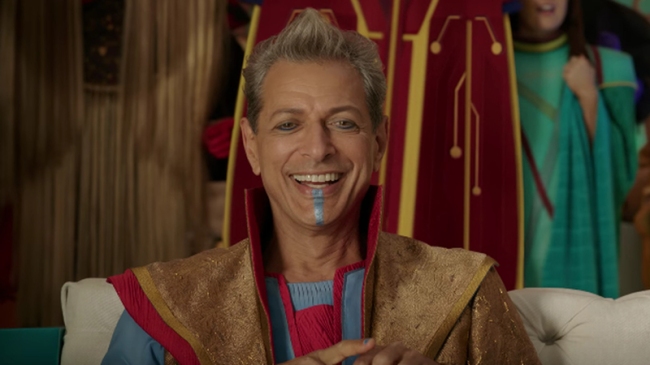 The broad plot of Ragnarok involves Thor and his rapscallious brother Loki (Tom Hiddleston) discovering they have an older sister, Hela (Cate Blanchett) — a.k.a “the Goddess of Death” — who was banished from existence by Odin (Anthony Hopkins) before Thor’s birth. So powerful is Hela, she shatters Thor’s hammer single-handedly, before him and Loki careening through space. They land on Sakaar, a junkyard planet run as a gladiatorial arena, where Thor becomes the new Spartacus or Maximus.

All the fighting-in-the-coliseum stuff makes up much less of the movie than the marketing has made it out to, but the rest of the movie is best left unknown and unanticipated, so the less said about where the plot goes from there the better.

Hemsworth and Hiddleston adapt wonderfully to the change in tone, simply cranking up the sibling banter that made their scenes in Thor, The Avengers, and Thor: The Dark World so fun. Jeff Goldblum is also a complete riot as the Grandmaster, the emperor who runs Sakaar.

Also, it’s not enough for director Taika Waititi to be content simply directing one of the most vibrantly colourful MCU chapters; he also steals the entire movie as Korg, a rock creature played as a cross between a Maori warrior and a people-pleasing realtor. (“I’m made of rocks, as you can see, but don’t let that intimidate you. You don’t need to be afraid, unless you’re made of scissors. That’s just a little rock-paper-scissors joke for you.”)

When I reviewed Thor: The Dark World four years ago, I mentioned that all it would take is a strong third entry for the Thor trilogy to supass the Iron Man trilogy. The first two Iron Mans and the first two Thors all got 4 stars, but Iron Man 3‘s unfocussed screenplay couldn’t quite reach the same bar as its predecessors.

Thor: Ragnarok has no such problem. Its clever and innovative take on how to present a Marvel movie has produced one of the freshest movies of the MCU, with a tone that’ll likely prove inimitable.

After Guardians of the Galaxy, Vol. 2 and Spider-Man: Homecoming, Ragnarok‘s strong delivery is quite the relief. I was worried we were already entering into Marvel’s Brave and Monsters University period, their best years behind them. Maybe we’re not there yet; the triumphant success of Thor: Ragnarok rather points to entering the WALL-E/Up/Toy Story 3 era. In which case: bring on Black Panther and The Avengers: Infinity War.